Says it won’t compromise as the case pertains to national security of the country, calls India’s nuclear programme a threat. 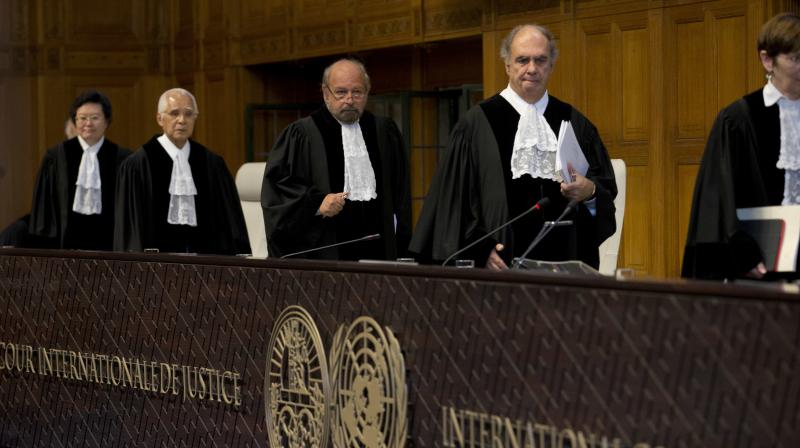 Presiding judge Ronny Abraham of France, center, enters to read the World Court's verdict in the case brought by India against Pakistan in The Hague, Netherlands. (Photo: AP)

Islamabad: Pakistan on Thursday said that the International Court of Justice (ICJ) had no jurisdiction to hear case of alleged Indian spy Kulbhushan Jadhav as it pertained to the security of Pakistan.

Foreign office spokesperson Nafees Zakaria said that Pakistan’s reply to the ICJ was submitted in line with Article 36 of the United Nations Charter, explaining that Pakistan, in some issues, does not recognise the jurisdiction of the ICJ,” he said during a weekly news briefing in Islamabad.

Addressing a weekly media briefing, Mr Zakaria said, “India weaved a humanitarian angle in Kulbushan Jadhav’s case to divert the world’s attention from his real actions, fomenting terrorism inside Pakistan. After India stood exposed in state-sponsored terrorism and financing terrorism, it tried to divert attention from presenting the Kulbushan Jadhav case with a humanitarian angle.”

The spokesperson said Pakistan’s stance on the alleged Research and Analysis Wing (RAW) agent was clear. “It is a matter of national security and we will not compromise on it,” he added.

He said, “India’s fastest growing nuclear programme in the world had serious implications for strategic stability in South Asia and national security of Pakistan.” He said that Pakistan had been underscoring the risk of diversion by India to imported nuclear fuel, equipment and technology received pursuant to civil nuclear accord and 2008 energy waiver by Nuclear Suppliers Group (NSG).

The spokesperson urged NSG members to consider risks involved in transfer of nuclear material to India and its NSG membership bid.

To a question, he said, “India’s move requiring advisor on foreign affairs of Pakistan to write a recommendation letter to Indian external affairs minister for every medical visa case is unprecedented in inter-state relations.”

He alleged the RSS slaughtered over half a million Kashmiri Muslims in November 1947 together with Dogra and Indian forces. He added young Kashmiris, particularly the students were the target of forces and RSS. “Over 200 people, including students, were arrested, while 500 people were injured when Indian forces subjected defenceless Kashmiris to force against them in Srinagar, Ganderbal, Budgam, Kulgam, Baramulla and many other districts.”