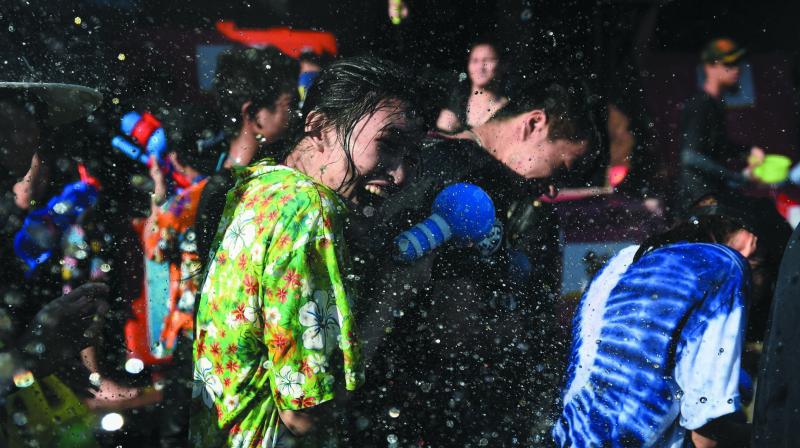 A woman reacts to being soaked in water during Songkran, or the Thai New Year, celebrations on Khaosan Road in Bangkok on April 14.

Last week’s full moon, dubbed the “Pink Purnima” by a Indian bistro in Bangkok, marked the Vernal Equinox and New Year celebrations: Vilambi in Tamil Nadu, Vaisakhi in Punjab, Bikram Sambat in Kathmandu and Songkran, Thailand’s Holi. Public squares hosted water parties with live bands, overhead sprinklers, water canons and buckets, which spared neither pedestrian nor motorist. In this official year of mourning for King Bhumibol Adulyadej, many Thais replaced their traditional multicoloured floral shirts with black and white, to match the hues of king’s portraits which float upon the skyline on billboards and high rises. “It’s a special Songkran” said a college student, spraying giddy falang tourists with a water pistol, “because it feels like the last one we’ll have with King Bhumibol.”

Throughout Thailand seeds of India are seen in language, astrology, ritual and art, fertilised in the rich soil of Thai magic and folklore, refined to perfection in the Ayutthayan period, still potent in the 21st century. The Mahabharata tells of how Brahma insulted Shiva, thus Shiva cursed Brahma that his worship would die in India, and so it did, but Brahma now dwells in Thailand, alongside Lord Buddha. Bangkok has over 350 Buddhist temples, both Theravada and Mahayana. Every mall, bank, hotel and home has a shrine to Phra Phrom, Lord Brahma, whose four heads offer specific blessings and are daily worshipped with flowers, incense, fruits and candle flames. The rites and symbols of Siamese kingship evolved from ancient India, Thai government buildings are adored with red Garudas, the emblem of the Chakri Dynasty, an 800-year-old lineage established in the 12th century by the Kingdom of Sukhothai.

Thailand was fortunate to have escaped colonisation, thus its cultural and national continuity was not severed by European powers.

In the 19th century, King Mongkut and his son King Chulalonghorn saw Britain take Burma and France capture Indochina. They sent their sons to European military academies and their ambassadors to European courts, abolished slavery and polygamy, modernised infrastructure and expanded public education. In the early years of his 70-year reign, King Bhumibol and Queen Sirikit made state visits to 25 countries, which greatly elevated Thailand’s international stature. If you find yourself in Bangkok, go straight away to the Queen Sirikit Museum of Textiles in the Grand Palace to see the exhibition “Fit for a Queen” which showcases the dazzling fashions Queen Sirikit created with the French designer Pierre Balmain, a mélange of Thai textiles and French couture which kept the elegant Thai Royals in global headlines and Her Majesty at the top of the International Best Dressed List for years.

In the 20th century, King Bhumibol saved Thailand from a more vicious and catastrophic European ideology: The Communist Manifesto. When Saigon fell to the Viet Cong in 1975, King Bhumibol vowed to remain in Thailand to protect his nation.

In his first address to the Thai Parliament after his 1950 coronation, the King expressed his concern that Thailand resist incursions of Communist insurgencies from neighboring states, stating that development and education were the best defense against the totalitarian threat. Thailand’s Communist insurgents launched a guerilla war against the state from 1965 to 1983, which caused many casualties, among them Princess Vibhavadi Rangsit, a renown author, senior advisor and close friend of Queen Sirikit, who was shot and killed in 1977 while delivering aid to Royal projects and visiting troops fighting Communists in southern Thailand.

The King continued to visit rural districts near Laos or Cambodia, with protection from helicopters and infantry.

The 1979 BBC documentary “Soul of a Nation” follows the King and Queen traveling to remote regions targeted by Communist rebels.

The King preferred to drive his own land rover deep into the countryside to meet with his people and supervise his royal development projects. When BBC reporter David Lomax asked King Bhumibol if he was waging war with Marxists, the king replied that he was “waging war on hunger.”

The king deftly rejoined Lomax’s baited question about monarchy being the past and Communism the future, stating that Communism promotes the idea of the “Top Man” whereas his Buddhist faith valued morality and universal law — Dhamma in Pali — over absolute power.

In 1980, the King sent his Prime Minister Prem Tinsulanonda to offer amnesty to the rebels, thousands defected from the party and by 1983 the insurgency came to an end.

The 20th century was a disaster for Buddhism, one of the world’s largest religions in 1900, vanquished at midcentury by Marxist despots.

It is one of King Bhumibol’s greatest legacies that he saved Thailand from the totalitarian virus, which caused the deaths of an estimated 100 million people in the 20th century.

Thai newspapers have been chronicling the construction of a grand crematorium near Bangkok’s Grand Palace, where King Bhumibol’s body lies in state. Brahmin priests have blessed special trees selected for the structure; over 7,000 artisans are recreating Mount Sumeru, the centre of the Buddhist cosmos, where the kings’ spirit will ascend after his cremation at the end of this year. Dr Sumet Tantivejkul, secretary-general of King Bhumibol’s Chaipattana Foundation said: “The late King has never really left us… he taught us so many things during his 70-year-long reign… let us follow in his footsteps.”