Thai cave boys discharged from hospital ahead of press conference

Called 'Sending the Wild Boars Home' and broadcast on major television channels, the session will last for about 45 minutes. 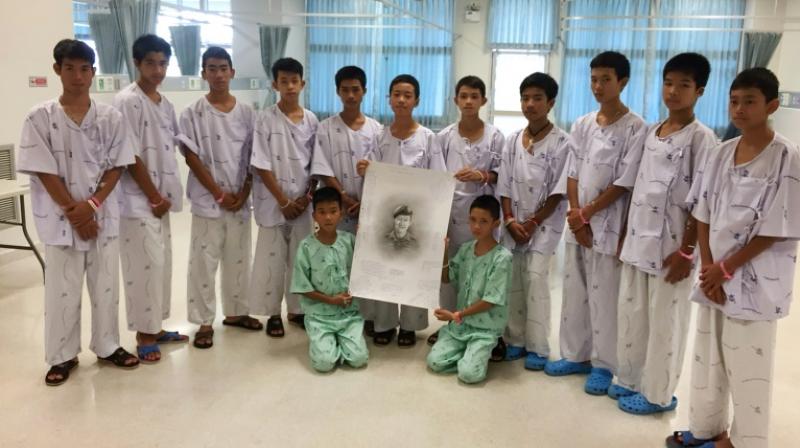 The footballers from the "Wild Boars" club are being discharged a day earlier than previously announced, with authorities hoping a question and answer session will satisfy -- at least temporarily -- the intense media speculation that has accompanied their epic underground ordeal. (Photo: AFP)

Chiang Rai: Twelve boys and their football coach who survived a highly dangerous and dramatic rescue from a flooded Thai cave were discharged from hospital Wednesday ahead of a press conference where they will tell their incredible story for the first time.

An AFP correspondent on the scene saw the team, who were wearing football kits, board three minibuses at the hospital in northern Thailand's Chiang Rai province.

The footballers from the "Wild Boars" club are being discharged a day earlier than previously announced, with authorities hoping a question and answer session will satisfy -- at least temporarily -- the intense media speculation that has accompanied their epic underground ordeal.

The boys are due to return to their homes later Wednesday.

"The reason to hold this evening press conference is so media can ask them questions and after that they can go back to live their normal lives without media bothering them," Thailand's chief government spokesman Sunsern Kaewkumnerd told AFP.

Called "Sending the Wild Boars Home" and broadcast on major television channels, the session will last for about 45 minutes, Sunsern said, adding that it would be conducted in an informal style with a moderator.

The briefing will be closely monitored, with experts warning of possible long-term distress from the more than two weeks they spent trapped inside a cramped, flooded chamber of the Tham Luang cave in northern Thailand.

The public relations department in Chiang Rai province solicited questions from news outlets in advance and they will be forwarded to psychiatrists for screening.

Thailand's junta leader Prayut Chan-O-Cha urged media Wednesday to be "cautious in asking unimportant questions" that could cause unspecified damage.

But the organisers have also set up a small makeshift football pitch at the press conference and the boys are expected to kick a ball around at the event.

Interest in the saga is unlikely to abate, with film production houses already eyeing a Hollywood treatment of the drama.

Doctors have advised families of the players, aged 11 to 16, that they should avoid letting them contact journalists for at least one month.

Though the boys and coach are said to be in good mental and physical health, they will be provided with additional psychological monitoring to detect lingering trauma.

Families of the youngsters are eagerly awaiting the homecoming.

Khameuy Promthep, the grandmother of 13-year-old Dom, one of the boys rescued from the cave, told AFP in an interview at their family shop in Mae Sai near the Myanmar border on Wednesday that she was very excited.

"This is the happiest day of my life," she said.

The daring Thai-led international effort to rescue the team captivated the world after the football team walked into the cave on June 23 and were trapped by rising floodwaters.

After nine days without a steady supply of food or water they were found emaciated and huddled in a group on a muddy ledge by British divers several kilometres inside Tham Luang.

Rescuers debated on the best plan to bring them out but ultimately decided on a risky operation that involved diving them through waterlogged passages while they were sedated to keep them calm and carrying them out in military-grade stretchers.

Not even the foreign cave diving specialists who took part were sure the mission would work and many expressed relief when it was all over after the final five were rescued on July 10.

Further attention was drawn to the rescue by a highly public spat between entrepreneur Elon Musk and a British caver who took part in the rescue.

Musk on Wednesday apologised to Unsworth over the slur, for which he had provided no justification or explanation.

"(H)is actions against me do not justify my actions against him, and for that I apologize to Mr. Unsworth and to the companies I represent as leader," Musk wrote on Twitter. "The fault is mine and mine alone."

Musk's attack on Unsworth had drawn widespread outrage and briefly sent shares in Tesla tumbling. Unsworth told AFP he may take legal action against Musk over the offensive tweet.