The extent of the opposition to the bill is such that business groups in Hong Kong, who generally are neutral, have also spoken against it. 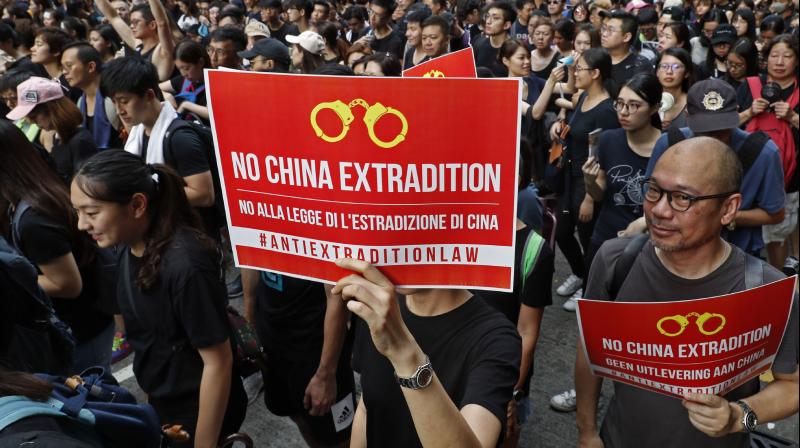 It must be noted here that although Hong Kong is an autonomous territory, there is close cooperation between its police and their mainland counterparts, who have among the most advanced and intrusive surveillance systems. (Photo: AP)

Hong Kong: Latest protests in Hong Kong against the controversial bill that threatens to send criminal suspects to mainland China for prosecution, were marked by unprecedented and coordinated efforts by demonstrators to stay a step ahead of government surveillance and identification.

A recent article in The Washington Post highlights the innovative ways that demonstrators adopted all through the waves of protests this past week to leave no trace of their actions for the authorities and their enhanced tracking systems.

From using secure digital messaging apps such as Telegram to buying single ride subway tickets instead of prepaid stored-value cards, the protests offered a glimpse of what it looks like to stage mass civil disobedience in the age of the surveillance state.

It must be noted here that although Hong Kong is an autonomous territory, there is close cooperation between its police and their mainland counterparts, who have among the most advanced and intrusive surveillance systems.

"It is the fundamental reason people are protesting in the first place," said Antony Dapiran, who wrote a book on protest culture in Hong Kong. "They don't trust Beijing, they don't trust their authorities and the legal system, and they don't like the blurring of lines between Beijing and Hong Kong."

Other efforts to conceal identity included: Forgoing credit cards and mobile payments in favour of cash, wearing face masks to obscure themselves from CCTV, avoiding taking selfies or photos of the chaos, and buying fresh pay-as-you-go SIM cards.

"We are much more cautious now for sure than in 2014 [during the pro-democracy protests]. Back then, it was still kind of rare for the police to arrest people through social media," Caden said, who did not give his full name for fear of retribution. "All of this is definitely new for most people there."

"People keep telling each other not to take pictures during the protest and only to take wide shots without people's faces on them," she added.

One of the many activists arrested during the 2014 pro-democracy protests was 22-year-old Joshua Wong. Born in 1996, eight months before control of Hong Kong was handed over from the UK to China, Wong has spent most of his adolescence and all of his early adulthood fighting for the city's rights against what he and others say is increasing encroachment by Beijing.

Wong was released from prison on Monday, a day after as many as two million people took to streets to march against the extradition bill. After being released, the activist thanked his supporters in Taiwan, where the Hong Kong protests have become a major issue in the country's presidential election, creating yet another major contention for Beijing.

The extradition bill was proposed on April 3. The opposition to the bill argue that its controversial amendments will leave anyone on Hong Kong soil vulnerable to being grabbed by the Chinese authorities for political reasons or inadvertent business offences. They further reason that the newly framed extradition plan would dissolve the rights and legal protections, which were guaranteed under the city's handover from British colonial rule to Chinese sovereignty in 1997.

The extent of the opposition to the bill is such that even business groups in Hong Kong, who generally take a neutral stance on political issues, have also spoken out against it.

Owing to the continued protests this last week, the city government on Saturday made a stunning reversal, when it halted the controversial amendments in the bill from becoming a law, only days after continuing to push ahead with it. Albeit, the protests continue, as the demonstrators are demanding nothing less than the permanent scrapping of this controversial bill.