At least 25 dead as Philippine bus plunges into ravine

In one of the deadliest vehicle accidents in the country in recent years, most of the other passengers were seriously injured. 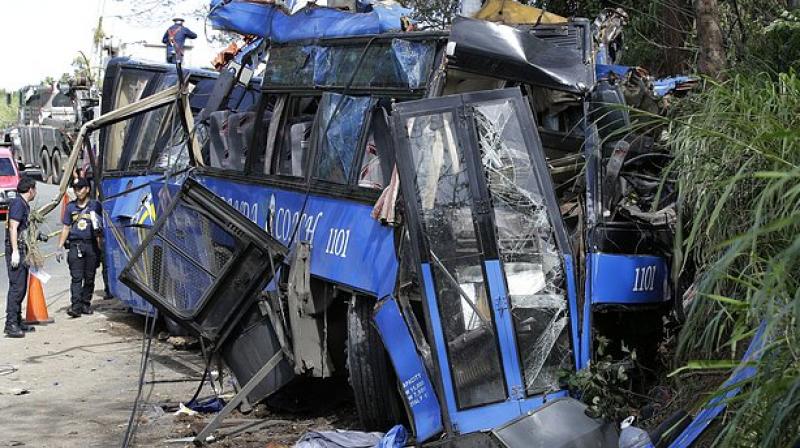 The brakes of the bus apparently failed as it negotiated a downhill road in Nueva Ecija province's Carranglan town. (Photo: AP)

Manila: At least 25 people died on Tuesday when their bus apparently lost its brakes and plunged into a deep ravine in a northern Philippine mountain town, in one of the country's deadliest vehicular accidents in years, officials said.

The rest of the estimated 45 passengers were plucked by rescuers who struggled with ropes to descend down the ravine to reach the bus wreckage in Nueva Ecija province's Carranglan town, disaster-response officer Mark Raymond Cano said.

Many of the passengers had serious injuries and were taken to a hospital, he said. Carranglan police chief Robert de Guzman said the bus from northern Isabela province was on its way to Ilocos Sur, a tobacco- and rice-growing region also in the country's mountainous north, when it crashed shortly before noon.

In February, a sight-seeing bus carrying college students on a camping trip lost its brakes on a steep downhill road and smashed into a concrete electrical post in Tanay town in Rizal province east of Manila, leaving 15 people dead.