Mangkhut landed at 5 pm on Sunday on the coast of Jiangmen City in Guangdong province, packing winds up to 162 km per hour. 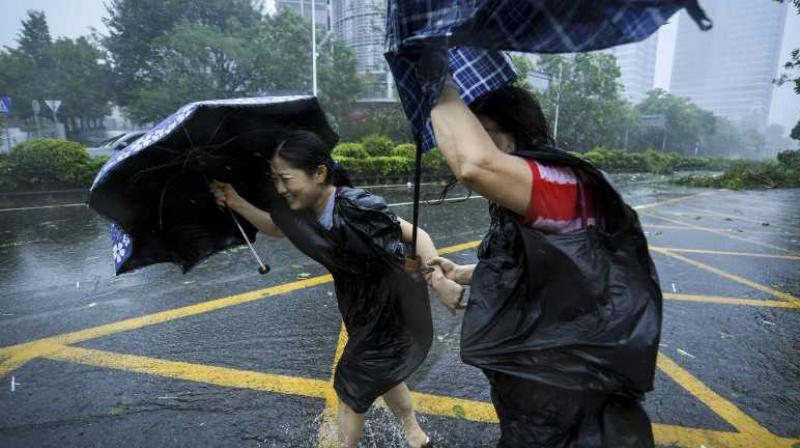 Beijing: Typhoon Mangkhut, the year's most powerful tropical storm to hit the Chinese mainland, barrelled into the coast of Guangdong province killing at least four persons and forcing evacuation of over 3.11 million people in the southern region after leaving a trail of death and destruction from the Philippines to Hong Kong.

Mangkhut landed at 5 pm on Sunday on the coast of Jiangmen City in Guangdong province, packing winds up to 162 km per hour, according to the provincial meteorological station.

Three people were killed by falling trees in Guangzhou, the provincial capital, while another person died from collapsing construction materials in the city of Dongguan, Guangdong's disaster relief authorities said.

More than 3.11 million people had been relocated and over 49,000 fishing boats were called back to port in the province, state-run Xinhua news agency reported on Monday.

Work has been suspended at more than 29,000 construction sites and 640 tourist spots were closed.

The airports of Guangzhou and Shenzhen. All high-speed train services and some normal-speed rail services have been suspended in Guangdong and Hainan provinces.

The storm was still raging across southern China's coast and the provinces of Guangdong, Guangxi and Hainan and rain and strong winds were expected to continue through Tuesday, the report said.

Mangkhut made landfall in western Guangdong on Sunday afternoon before moving into neighbouring Guangxi Zhuang autonomous region, bringing with it torrential rains and gales.

Though the worst appears to have passed for Guangdong province, local meteorological authorities warned residents to remain alert for floods and landslides in Guangxi.

Mangkhut earlier lashed the Philippines, sparking landslides and building collapses that killed at least 65 people, with another 43 missing.

Hong Kong was also buffeted by fierce winds that tore off roofs, downed trees and caused cranes perched atop half-built skyscrapers to swing ominously. However, there were no reported deaths in Hong Kong, a city well prepared for tropical cyclones.