When Trump announced that US would stop massive war games with S Korea, a longtime Chinese goal, it was clear that Beijing made its mark. 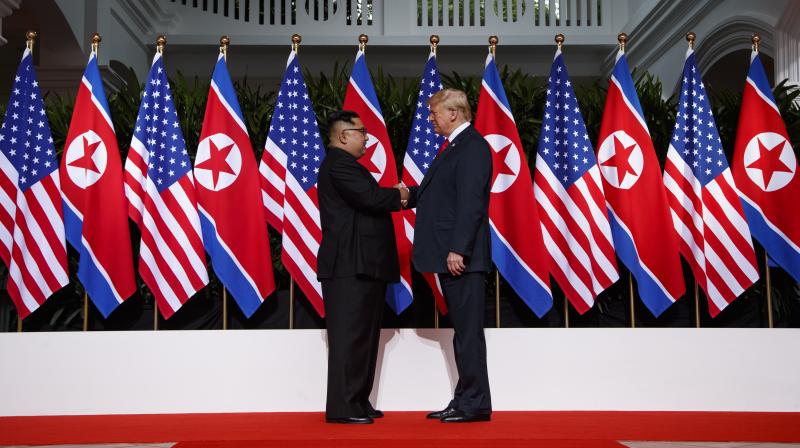 The complete denuclearisation of the peninsula and the establishment of a peace mechanism for the peninsula are consistent with China's constant claims. (Photo: AP)

Beijing: China may not have been at the table for Donald Trump and Kim Jong Un's historic summit, but it still scored a strategic victory and sent out a clear message: no one puts Beijing in the corner.

Just months earlier, it seemed as though the US might cut China out of its negotiations with the North altogether, as direct contact was established between Pyongyang and Washington.

But Beijing was not about to allow itself to be left out of the action on the Korean peninsula, where it has long claimed security and economic interests, and Chinese officials moved quickly to remind both the US and North Korea that Beijing was indispensable.

And after the summit, when Trump made the shock announcement that the US would stop its massive war games with South Korea -- a longtime Chinese goal -- it was clear that Beijing had made its mark on the proceedings.

The dramatic turnaround was further cemented when US Secretary of State Mike Pompeo rushed to the Chinese capital to brief President Xi Jinping and other top leaders on the Trump-Kim meeting.

"The results of the Singapore Summit are basically in line with China's expectations," said Wu Xinbo, an expert on international relations at Shanghai's Fudan University.

"The complete denuclearisation of the peninsula and the establishment of a peace mechanism for the peninsula are consistent with China's constant claims."

That outcome made China "the strategic winner of the summit," according to one western diplomat, who asked for anonymity to discuss the sensitive subject.

Previously, "they would never have dreamed of Trump halting the joint manoeuvres with South Korea and mentioning possibly withdrawing troops from the South in the future."

Back in the game

Beijing's influence on the summit's outcome was far from a foregone conclusion.

For years, China has propped up the North Korean economy in the face of international pressure, worried about a possible collapse of the Kim regime, which it sees as a strategic buffer against the US military presence in South Korea.

But Beijing could not ignore Pyongyang's repeated nuclear and missile tests last year, and chose to support UN sanctions -- cutting off the flow of coal, textiles, and other goods from North Korea.

With those concessions in hand, the US seemed intent on moving ahead without Beijing.

And when Trump announced in March his plan to meet Kim, it looked like Washington was planning to cut out the middleman and make a deal directly with Kim.

But China scrambled to put itself back in the game.

After years of being persona non grata, Kim suddenly made his first state visit to Beijing, closely followed by a second meeting with Xi in the Chinese port city of Dalian.

Up to that point, the North "really did not prioritise the ending of exercises by the US and South Korea," said Bonnie Glaser, senior Asia advisor at Washington's Center for Strategic and International Studies.

"And then Xi Jinping met with Kim in Dalian and all of a sudden, we had an about-face by the North Koreans."

"The whole thing looks to be not just a win for Kim, but also very much a win for Xi Jinping," she added.

"The Chinese have long believed that if they could actually dislodge US troops from the region that would be the key to eliminating or severely diminishing US influence in the region and accelerating the creation of a more China-centric region."

Following the Singapore summit, China has made it clear it intends to play a leading role in the negotiations, couching that insistence in diplomatic offers to lend its assistance.

The US likely has no choice but to play along.

"Ultimately, if there is to be a successful settlement between the US and (North) Korea, China has to be involved," said Charlie Parton, a former British diplomat in China now working at the UK-based think tank Royal United Services Institute (RUSI).

"You can't ignore an enormous power with a land border and a determination to make North Korea its business."

Now that China has successfully brought itself back into the negotiations, it could use its position for leverage in other areas of its relationship with the US, he said.

"We hope to treat political issues and economic issues separately, but if China and the US really open up a trade war, it will have an impact on the entire Sino-US relationship, including future Sino-US relations on the North Korea issue," Parton warned.

"It will inevitably make the coordination between the two countries on North Korea issue more complicated."