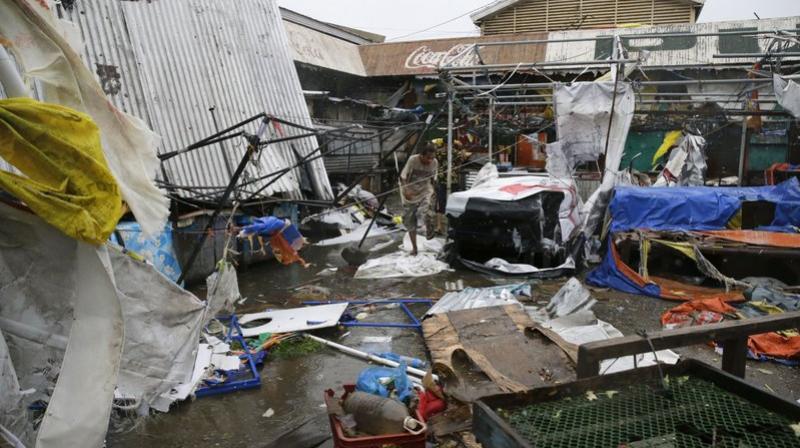 Residents walk along destroyed stalls at a public market due to strong winds as Typhoon Mangkhut barreled across Tuguegrao city in Cagayan province, northeastern Philippines on Saturday, September 15, 2018. (Photo: AP)

Manila: Typhoon Mangkhut has killed at least 25 people in the Philippines as it smashed homes and left behind torrents of floodwater, and is now on course to plough into China's coast.

"As we speak... there are 25 dead," Francis Tolentino, the government's lead disaster co-odinator, told AFP as reports began to emerge from regions cut off by the typhoon.

The massive storm, considered this year's strongest, left key agricultural areas on Luzon island underwater as its fierce winds tore trees from the ground and rains unleashed dozens of landslides.

Because communications and electricity were knocked out across much of the region where about five million people were in the typhoon's direct path, officials are still assessing the human and material cost.

In the northern town of Baggao, the storm collapsed houses, tore off roofs and downed power lines. Some roads were cut off by landslides and many remained submerged.

Farms across Luzon, which produces a large portion of the nation's rice and corn, were sitting under muddy floodwaters, their crops ruined just a month before harvest.

"We're already poor and then this (storm) happened to us. We have lost hope," 40-year-old Mary Anne Baril, whose corn and rice crops were spoiled in the storm, told AFP.

"We have no other means to survive," she said through tears.

More than 105,000 people fled their homes in the largely rural region.

An average of 20 typhoons and storms lash the Philippines each year, killing hundreds of people and leaving millions in near-perpetual poverty.

The dead included many killed in landslides, a girl who drowned and a security guard crushed by a falling wall. In addition to the 10 killed in the Philippines, a woman was swept out to sea in Taiwan.

The country's deadliest storm on record is Super Typhoon Haiyan, which left more than 7,350 people dead or missing across the central Philippines in November 2013.

Mangkhut has weakened since blasting into the Philippine coast on Saturday, but was packing sustained winds of 175 kilometres per hour (110 miles per hour) as it hurtled toward China's heavily populated southern coast.

The city's observatory warned that Mangkhut would pass 100 kilometres south of Hong Kong at around midday (0400 GMT) local time as it raised the storm alert to its highest level.

Water levels in the famous Victoria Harbour and fishing villages could surge by up to four metres, authorities said, and hundreds of residents have been evacuated to storm shelters as the observatory forecast severe flooding for low-lying areas.

Shop windows were taped up and the normally traffic-clogged streets were deserted as the storm drew nearer.

The government has warned people to stay indoors but some were strolling in the park or along the waterfront Sunday morning.

"I went running this morning. I love fresh air and there's no one on the streets, no cars. On normal days we can't see this," said Hao Chen, 28, who lives in the neighbourhood of Tin Hau, on Hong Kong Island.

Some residents reported their buildings were swaying in the wind and parks were already strewn with broken branches by the early morning.

Resident Antony Kwok in the fishing village of Tai O said flood shields and ladders had been set up to protect those who live in the area's stilt houses as waters began to rise, in a post on Facebook Live.

Almost all flights in and out of Hong Kong have been cancelled.

In the neighbouring gambling enclave of Macau, all 42 casinos shut late Saturday night and businesses were shuttered Sunday morning, some boarded up and protected by piles of sandbags.

Authorities warned of flooding around midday local time when waters could reach 2.5 metres above road level.

The government and casinos are taking extra precautions after Macau was battered by Typhoon Hato last year, which left 12 dead.

Preparations were in high gear on China's southern coast, including in Yangjiang, which is not often hit by major typhoons and where the city's 2.4 million people were bracing for a direct hit.

Further down the coast preparations were also underway in Zhanjiang, where some villagers feared for the worst.

"I couldn't sleep last night, I saw the typhoon on television and how intense it was," said 55-year-old Chan Yau Lok.