Anti-India protests in Pakistan call for jihad in Kashmir

Khalid Saifulla, and Naib Ameer of Hizbul Mujahideen and others participated in an anti-India protest outside the Press Club in Muzaffarabad 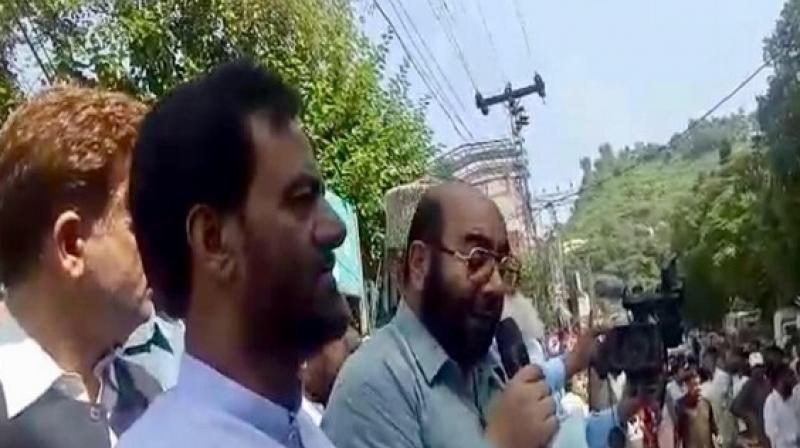 Khalid Saifulla, and Naib Ameer of Hizbul Mujahideen along with former mujahideen (terrorists) participated in an anti-India protest outside the Press Club in Muzaffarabad (Photo: ANI)

Muzaffarabad: In an exclusive video from Muzaffarabad city of Pakistan occupied Kashmir (PoK), terror outfits are seen regrouping with an aim to launch 'jihad' against India.

The Pakistani authorities are now encouraging terror groups like Hizbul Mujahideen and United Jihad Council (UJC), headed by Syed Salahudeen to come over the ground in their bid to target India after the abrogation of Article 370 and Article 35A from Jammu and Kashmir.

On Thursday, Khalid Saifulla, and Naib Ameer of Hizbul Mujahideen along with former mujahideen (terrorists) participated in an anti-India protest outside the Press Club in Muzaffarabad where he gave a call for jihad against India.

"Action works more than words. My friends, we are all ready for jihad. (Syed) Salahudeen, move forward, we are with you," said Saifulla in his hate speech against India.

Giving a brief on a conversation between Zia and Rajiv Gandhi, he told the gathering "Mr Rajiv you want to invade Pakistan? Ok fine, go ahead! But please remember one thing that after that people will forget Changez Khan and Hilaku Khan and will remember Zia and Rajiv Gandhi only. Because it will not be a Conventional War."

He added, "Pakistan may possibly suffer annihilation but Muslims will still survive because there are several Muslim countries in the world. But remember there is only one India and I shall wipe out Hinduism and Hindu religion from the face of the earth! And if you don't order complete de-escalation and demobilisation before my return to Pakistan, the first word of mouth I will utter will be "Fire"!"

Terrorists in Pakistan continue to openly hold rallies despite the country is in Grey List of Financial Action Task Force (FATF), the international watchdog against money laundering and financing of terrorism.

This is not the first time Pakistan has found itself on one of FATF lists of not-so-good guys; the country was there in 2008 and from 2012 to 2015 too.