Plastic pollution has become an increasing concern, particularly after bans imposed by some countries on the import of plastic waste. 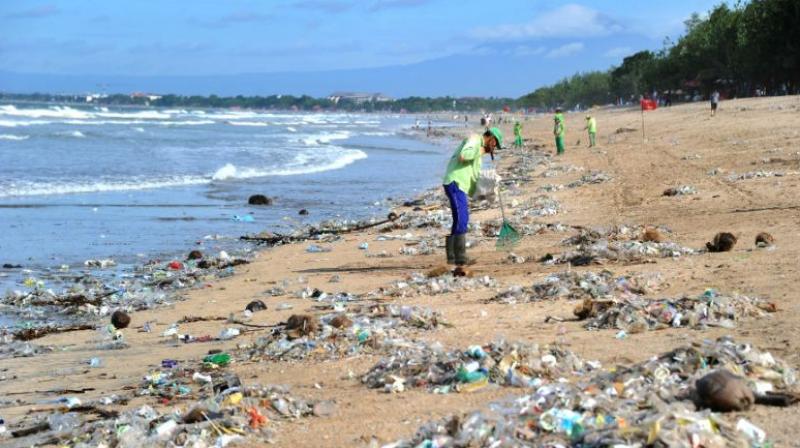 Many countries, including Japan, have seen plastic waste pile up in the wake of the ban. (Photo: File)

Tokyo: The Group of 20 major economies was set to seal a deal on reducing marine plastic waste at a meeting in Japan on Sunday where they also discussed energy security following the oil tanker attacks in the Gulf of Oman.

Plastic pollution has become an increasing international concern, particularly after bans imposed by China and other countries on the import of plastic waste from overseas.

Many countries, including Japan, have seen plastic waste pile up in the wake of the ban. Among the many concerns is the issue of microplastics, the tiny pieces of degraded waste that are difficult to collect once they enter the water.

Microplastics tend to absorb harmful chemicals and accumulate inside fish, birds and other animals.

The proposal, made at the two-day meeting in the central mountain resort of Karuizawa, would be the first-ever framework to reduce plastic pollution in the ocean and is expected to be included in a joint communique by the G20 ministers later Sunday.

Under the expected agreement, G20 members would commit to undertaking efforts to reduce the amount of plastic waste that ends up polluting oceans and to reporting their progress on a regular basis, according to Japanese media.

If an international framework on reducing marine plastic waste is agreed, it would be "the first step toward resolving the issue," Hiroaki Odachi of Greenpeace Japan told AFP.

"But given the critical situation of ocean pollution with plastics, it is urgently needed to set up legally binding action plans with clear timelines and goals," he added.

With only an estimated nine per cent of plastics ever produced recycled, campaigners say the only long-term solution to the plastic waste crisis is for companies to make less and consumers to use less.

Japanese industry minister Hiroshige Seko, who is co-chairing the discussions with Harada, said late Saturday that Japan would aim to require businesses to charge for disposable shopping bags by as early as April to help reduce waste.

Many countries in the world already charge for single-use bags or ban them outright.

On energy security, Seko said Tokyo "is watching with grave concerns at the attacks on oil tankers by someone."

"From a viewpoint of global energy security, it is necessary for the international community to jointly deal with the act," Seko told the meeting. The ministers agreed on the importance of securing stable energy supplies, he said.