It does not cover Rohingya refugees who were living in Bangladesh prior to that date who the UN estimates number at 200,000. 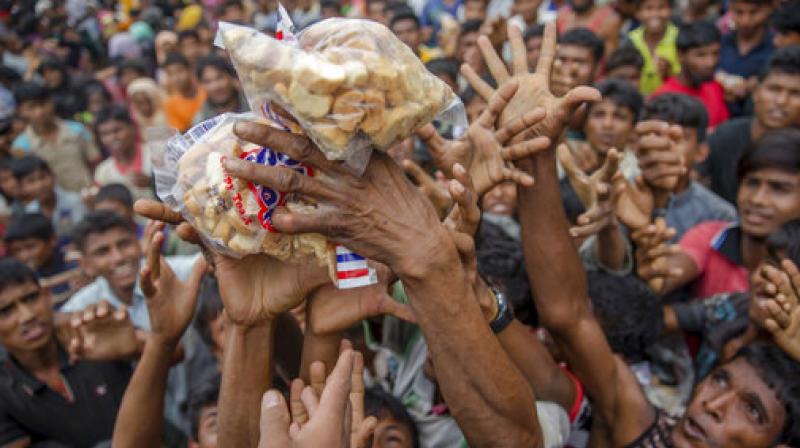 The agreement follows a pact between the countries in November paving the way for repatriations from January 23, a deadline that is likely to slip given the logistical challenges of the cross-border operation. (Photo: AP)

Yangon: Myanmar and Bangladesh have agreed to repatriate Rohingya displaced by an army crackdown "within two years", Dhaka said on Tuesday, outlining the first clear timeline for a return of hundreds of thousands of refugees.

The agreement says the process will be "completed preferably within 02 (two) years from the commencement of repatriation", according to a statement from the Bangladeshi government following talks in Myanmar's capital Naypyidaw.

The deal applies to Rohingya who fled Myanmar in two major outbreaks of violence since October 2016, when militants from the stateless Muslim minority first attacked border-guard posts in northern Rakhine state.

It does not cover Rohingya refugees who were living in Bangladesh prior to that date who the UN estimates number at 200,000.

"During this two-day meeting, we agreed on the form that refugees will have to fill to be able to come back to Myanmar," Mohammad Sufiur Rahman, Bangladesh ambassador in Myanmar told AFP.

"We should be able to start the process in the coming days," he said, but added Myanmar's stated deadline of next week for starting Rohingya repatriation was "not possible".

The agreement follows a pact between the countries in November paving the way for repatriations from January 23, a deadline that is likely to slip given the logistical challenges of the cross-border operation.

Myanmar has faced intense diplomatic pressure to allow the safe return of Rohingya refugees driven out by its army.

But many Rohingya in crowded camps in Bangladesh say they are reluctant to return to Rakhine state having fled atrocities including murder, rape and arson attacks on their homes.

Despite that, Myanmar authorities have pressed ahead with the construction of a "temporary camp" in Rakhine's Maungdaw district.

Eventually the site "will accommodate about 30,000 people in its 625 buildings" before they can be resettled permanently, Myanmar's state media reported this week.

But only a fraction of the buildings have been finished.