Thailand: A Ramakien for King’s Day

The 20th century was a disaster for Buddhism, as millions in Asia were slaughtered by communist regimes. 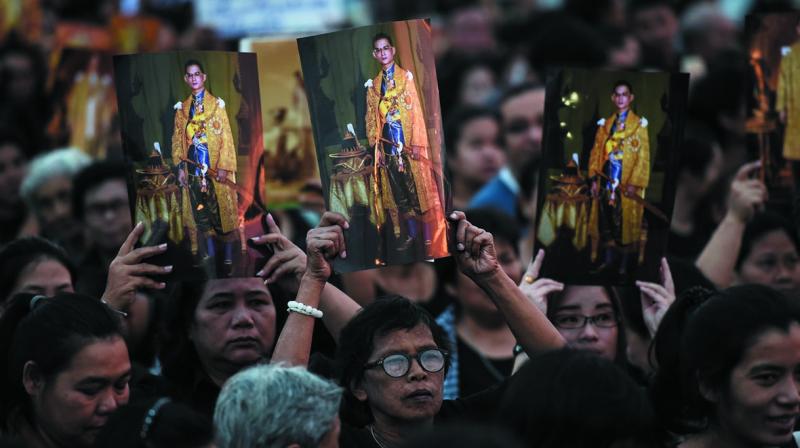 In this file photo, mourners hold aloft pictures of the late Thai King Bhumibol Adulyadej as people gather to commemorate his birthday on top of Bhumibol Bridge in Bangkok. (Photo: AFP)

In Thailand December 5, King Bhumibol’s birthday, is Father’s Day, King’s Day and International Soil Day, conferred by the United Nations in recognition of late king’s achievements in agriculture. It has long been a jubilant celebration, specially when the king completed an auspicious 12-year cycle in Chinese astrology. A Thai friend took me to the Dusit Palace, where volunteers who worked throughout the King’s year of mourning were rewarded with a Ramakien, Thailand’s national epic, based on India’s Ramayan. In palace gardens under a crescent moon, the stars of Khon, Thai classical dance, who dazzled the world at the royal cremation on October 26, incarnated the ancient tale so beloved in Southeast Asia. Phra Ram and Phra Lak are Ram and Laxman. Ravana is Toksakan, a clever demon king of wealth and taste with a glittering green-gold mask of 12 heads. Hanuman keeps his Indian name and steals the show whenever on stage.

The Ramakien is believed to have magical properties; it is said that whoever reads the full text in seven days and nights can summon rain and read the minds of men. It is also believed to grant protection to kings, and thereby the nation. Siamese kingship fused Khmer worship of the Devaraja, an avatar of Vishnu, with the Buddhist bodhisattva who earned “bun” — merit — from perfection of morality in past lives. Bhumibol’s grandfather Rama V, who saved Siam from European colonialists in the 19th century, is to this day widely venerated, his equestrian statures are believed to transmit his “Barami” a Theravada Buddhist term for “divine charisma”. Thai pop stars sing of King Bhumibol’s Barami; indeed, Rama 9 possessed a radiant aura, supernaturally photogenic and unerringly poised, a man who could compose jazz and quote Buddhist scripture and designed a Buddha image which was cast in bronze throughout his kingdom.

The 20th century was a disaster for Buddhism, as millions in Asia were slaughtered by communist regimes. Thailand survived, defeating a communist insurgency that waged war on the state from 1963 to 1983. Phra Meru, the royal cremation site, is now open to the public, with exhibitions about the king’s life, most prominently his commitment to Buddhist principles. In his Swiss childhood the king’s mother enrolled him in the Lycée and taught him the Iddhipada, the Buddhist four-point path of chanda — exertion; viriya — courage; citta — concentration; and vimansa — reflection, which he often said helped him execute his royal duties. Miraculous events occurred during his reign, widely reported in Thai newspapers, among them the discovery of nine white elephants and the world’s largest solid gold stature, a Sukhothai Buddha of the 13th century found in a Bangkok warehouse just before 1957, Buddha Jyanti in Varanasi, marking 2,500 years since Gautama Buddha’s paranirvana.

But the Thai people loved their king for the man he was. They knew him well, he was the most photographed man in Thailand and the first monarch to visit every region of his country. He suffered hardship in his youth, he was only three years old when his father Prince Mahidol died at age 37 while working in a leper colony. Bhumibol was raised by a single mother in Switzerland during World War II, when the dictator Field Marshall Phibunsongkhram drove his uncle Rama 7th into exile in England and joined forces with the Japanese fascists. When the Axis powers were defeated the monarchy was restored and Bhumibol became king in 1946, at age 19. He returned to Switzerland to complete his studies, but in 1948 he had a near fatal car accident, broke his back and lost his right eye. After a series of painful operations he returned to Thailand, and pursued his work with singular dedication. “We didn’t love our king blindly,” said a Bangkok nurse. “We saw him working every day. We knew he always had pain from his car accident. He had heart surgery in 60s. In his final years he worked from his hospital bed. But he never stopped.”

In this past year of mourning the people of Thailand have comported themselves with grace and dignity, despite dire prophecies from certain quarters of the foreign press of tumult and chaos in the wake of King Bhumibol’s passing. King Vajiralongkorn and the royal family are seen daily conducting civic duties and continuing the ancestral rites of the Chakri Dynasty. I had the honour of spending an afternoon with Anand Panyarachun, a distinguished statesman who twice served as Prime Minister of Thailand. Reflecting on Thailand’s past and future, he said: “Our late king was very visionary, methodical and practical in his approach to nation building. We certainly would not have progressed to where we are today without him.” The wise man then smiled, noting: “The institution of the monarchy has helped us survive many threats in our long history. Siam deserves some credit, we’ve lasted some 800 years.”