The photographer was thrown to the floor and kicked, reportedly suffering fractured facial bones and ruptured vessels in an eye. 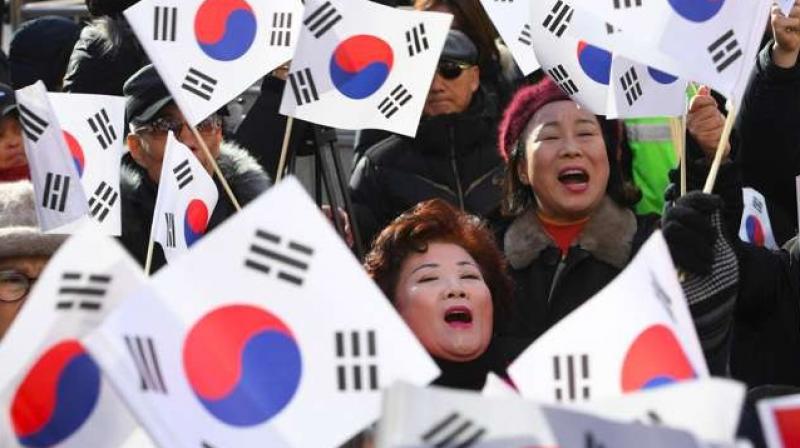 Opposition parties and internet users joined in, saying the incident epitomised the Asian giant's attitude towards its smaller neighbour.

The main opposition Liberty Korea Party urged Moon to call off his four-day state visit and return home immediately, saying the violence was a "terror attack against the whole of South Korea".

The photographer was thrown to the floor and kicked, reportedly suffering fractured facial bones and ruptured vessels in an eye, as Chinese security personnel stopped South Korean photographers following Moon's delegation at a trade show.

"Mistreatment of President Moon and lynching of a Korean journalist - This is the Chinese Dream", the Chosun Ilbo, South Korea's largest-circulation daily, headlined its editorial, referring to President Xi Jinping's promise of prosperity and influence.

Chosun and other newspapers noted Moon had his first three meals in China without any Chinese officials on hand, with a lunch with Premier Li Keqiang unilaterally scrapped.

He was greeted by an assistant minister when he landed, while Philippine President Rodrigo Duterte was welcomed in 2016 by Foreign Minister Wang Yi.

Chosun said the perceived diplomatic slight and the violence against a member of Moon's presidential press corps were "not accidental" and were driven by "China's arrogant and violent nature" and "Seoul's subservient attitude".

"This rudeness China exhibited toward the South Korean presidential entourage is the very nature of the Chinese Dream," it added.

The English-language Korea Times called it "an appalling use of force by Chinese security".

"We are dumbfounded and enraged at such violence against visitors... We are outraged by the rude welcome", it said.

Internet users also reacted angrily. "China trampled upon Korea and the whole Korean people," one said in a posting.

But others said many Korean photojournalists are overly eager to get the best possible images and often cross cordons, sparking trouble with security guards.

Chinese foreign ministry spokesman Lu Kang said on Thursday that while the trade show had been organised by the South Korean side, "if someone is hurt, of course we are concerned about that".