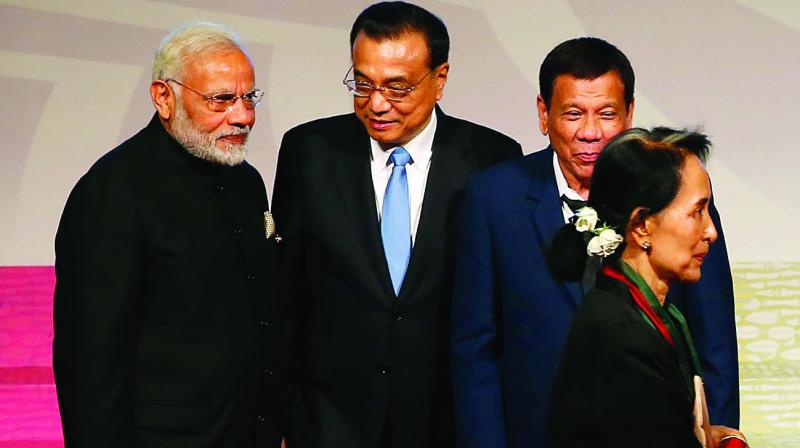 Manila: Prime Minister Narendra Modi on Tuesday strongly pitched for setting up of a rules-based regional security architecture in the Indo-Pacific region, in a clear display of convergence of strategic interests among major powers and India, and sending a subtle message to China against its military assertiveness in the area.

In his address at the Asean-India and East Asia summits, Prime Minister Modi also identified terrorism and extremism, including cross-border terrorism, as the major challenge facing the region and said time has come for all the countries to join hands to collectively deal with it.

Mr Modi talked about the need for a united approach to contain terrorism and radicalisation in the region, asserted India’s long-held position on freedom of navigation and over flight in the Indo-Pacific, called for an irreversible denuclearisation of the Korean peninsula and sought a detailed probe into North Korea’s nuclear proliferation linkages.

“India assures the Asean of its steady support towards achieving a rules-based regional security architecture that best attests to the region’s interests and its peaceful development,” Mr Modi told leaders of 10 Southeast Asian countries.

His comment is seen as India’s readiness in playing a major role in the broader regional security framework along with the US, Japan, Australia, which are giving shape to a quadrilateral security coalition, amid growing concerns among the Asean and other players over China’s military manoeuvring in the Indo-Pacific.

On the terrorism threats the region faces, including cross-border terrorism, Mr Modi said time has come for all the countries to join hands to collectively deal with it.

“We have individually strived very hard to fight terrorism and violent extremism. It is time that we jointly address this challenge by intensifying cooperation in this crucial area,” he said.

Reflecting its seriousness on terror, the East Asia Summit, a grouping of 10 Asean nations and nine other major countries including the US, India, Russia, China and Japan, issued separate declarations on anti-money laundering and countering terror financing as well as on combating ideological challenges of terrorist narratives.

The countries of grouping, in the declarations, expressed strong resolve to work unitedly to deal with the challenge of terror networks.

Secretary east in the external affairs ministry, Preeti Saran, said at the EAS, Mr Modi stressed on safe and secure navigation in the Indo-Pacific region and called for adherence to rule of law and international obligation, including respect for UNCLOS (United Nations Convention on the Law of the Sea), in clear reference to China’s aggression in South China Sea.

The issue relating to security in Indo-Pacific was discussed during the meeting between Mr Modi and US President Donald Trump on Monday. It was learnt that the issue also figured in bilateral meetings Mr Modi had with his Australian and Japanese counterpart on Tuesday.

“He (the PM) also called for the complete verification and irreversible enuclearisation of the Korean peninsula. He also pointed out that North Korea’s proliferation links must be investigated and to hold into account the parties who have supported these unlawful programmes,” said Ms Saran.

There have been reports that Pakistan had supported North Korea’s nuclear programme.

Ms Saran said Mr Modi also mentioned India’s position on Rohingya issue at the EAS. The violence against the Rohingyas in Myanmar’s Rakhine state have forced more than 600,000 people to flee the country to Bangladesh.

The Prime Minister also participated in a meeting of leaders of Regional Comprehensive Economic Partnership (RCEP) and expressed India’s commitment to its trade negotiations. The RCEP, comprising 10-member Asean bloc and six other countries — India, China, Japan, South Korea, Australia and New Zealand — is engaged in negotiations for a free trade pact.

In his address at the Asean, Prime Minister Modi talked about shared values and common destiny between India and the grouping and invited the leaders of the 10 countries to India’s Republic Day celebration as well as to an India-Asean Commemorative Summit in New Delhi on January 25 next year.

Mr Modi said 1.25 billion people of India are keen to welcome the Asean leaders as “our Chief Guests at India’s 69th Republic Day Celebrations.” The ties between India and Asean have been on an upswing.

The Asean region along with India together comprises combined population of 1.85 billion people, which is one fourth of the global population and their combined GDP has been estimated at over $3.8 trillion. Investment from Asean to India has been over $70 billion in the last 17 years accounting for more than 17 per cent of India’s total FDI.