There are more than 1,000 non-commissioned officers on the Liaoning, and they are the main part of China's aircraft carrier. 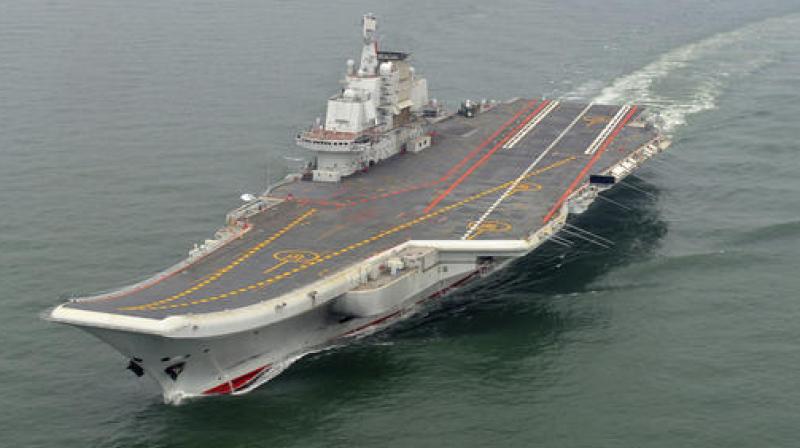 The Liaoning carrier is made from an empty hull of a Soviet era ship. (Photo: AP)

Beijing: China's first aircraft carrier is now ready for combat, a key breakthrough for a navy that has been trying to flex its muscles far beyond its shores amid territorial disputes with several neighbouring countries.

The Liaoning carrier, made from an empty hull of a Soviet era ship, recently left its shipyard in Qingdao in east China to start a new training mission to test its combat capacity as it is prepared to "fight against enemies".

The construction of China's second indigenously-built aircraft carrier is already underway at a feverish pitch. Liaoning, which had previously been described in Chinese media as a surface platform for tests and training, has now "formally been described as having a real combat capacity," the state-run Global Times said.

"As a military force, we are always combat ready and our combat capacity also needs to be tested by war. At this moment, we are doing our best to promote our strength and use it to prevent war. But we are preparing for actual combat at any time," Senior Captain Li Dongyou, the political commissar of the vessel, told the daily.

The refurbished ship was launched by former president Hu Jintao in 2012.

There are more than 1,000 non-commissioned officers (NCOs) on the Liaoning, and they are the main part of China's aircraft carrier. "Among them, we have 42 Chief Petty Officers with an average age of 40 and experience of serving in the navy for more than 20 years," Li said.

"Weaponry is the key for combat capability on the carrier. As China's first generation of NCOs on the carrier, these officers' capability on how to operate, repair and maintain equipment is irreplaceable. And they are the source of our confidence," Li said.

The report did not elaborate on how China plans to use the carrier, but Liaoning is seen as to put more muscle behind the Communist giant's increasing assertive moves in the South China Sea, where territorial claims by neighbouring nations have dogged China's expansionist idea, and where it faces challenges from the US.

The South China sea, through which USD 5 trillion of trade passes annually, has been a centre of dispute between China and Brunei, Malaysia, the Philippines, Taiwan and Vietnam.

"As a combat platform, China still lags behind the US in technology and capability to execute missions, but three senior US officials who visited the Liaoning before all gave a positive evaluation on the management of the carrier, officers and soldiers' daily lives and training are well organised and the equipment maintenance is fine," Li said.

Chinese media reports have said that as the construction of the second aircraft carrier picked up pace, China has stepped up preparations to deploy the first carrier force by putting in place a new batch of carrier-based fighter pilots.

With plans to build two more carriers, the PLA as built up its largest carrier-based pilot team after more than three years of intensive training, media reports had said in August. Speculation is rife that China may deploy one of the aircraft carriers in the South China Sea.