South Korea fears infections getting out of control

With 103 new cases reported Friday, this is the first time since late March that the daily increase surpassed 100 two days in a row 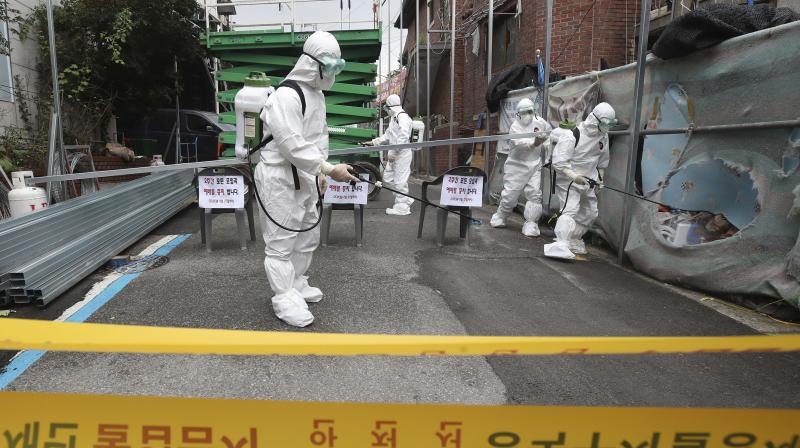 Public officials disinfect a church as a precaution against the coronavirus in Seoul, South Korea. (AP)

Seoul: New coronavirus cases in South Korea have reached the highest level in five months, and authorities fear infections are getting out of control in the Seoul region, which is home to half the country's 51 million people.

Officials reported 166 newly confirmed cases on Saturday. That was the highest since March 11, when South Korea reported 242 amid an outbreak in the southeastern city of Daegu and nearby towns.

With 103 new cases reported Friday, this is the first time since late March that the daily increase surpassed 100 two days in a row.

Officials say all but 11 of the new cases were local transmissions, and most were in the Seoul area.

The figures announced by South Korea's Centers for Disease Control and Prevention Saturday brought the national caseload to 15,039, including 305 deaths.

The KCDC said 155 of the new infections were local, mostly from the densely populated Seoul metropolitan area where authorities scurried to shut down thousands of churches, which have emerged as a major source of COVID-19 cases.

Many of them had failed to properly enforce preventive measures, allowing worshippers to take off their masks, sing in choirs or eat together in diners.

Other clusters have been tied to nursing homes, schools, restaurants, outdoor markets and door-to-door salespeople.

Government officials have expressed concern that transmissions could worsen due to demonstrations planned by anti-government protesters and labor unionists in Seoul on Saturday, the 75th anniversary of the country's liberation from Japanese rule at the end of World War II.

The spike could result in stronger social distancing measures at major cities, which they have so far been reluctant to take because of economic concerns. They could include a ban on public gatherings, shutdowns of entertainment venues, and removing fans from baseball and other professional sports, which began to partially let in spectators only in late July.