North Korean leader Kim Jong-Un urged the US to 'stop at once arrogant provocations' against the North and not provoke it any longer. 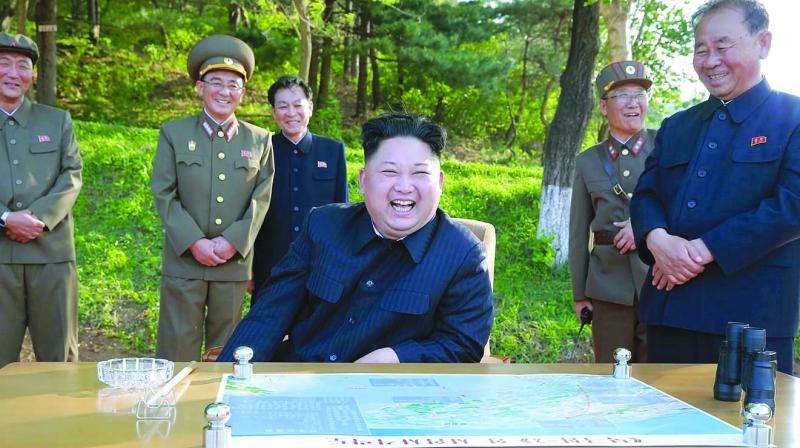 Seoul: North Korean leader Kim Jong-Un has been briefed on a plan to fire missiles near Guam but hinted that he would hold off on the launch, Pyongyang's state media said Tuesday.

Kim "examined the plan for a long time" and "discussed it" with commanding officers on Monday during his inspection of the command of the Strategic Force in charge of the North's missile units, according to the Korean Central News Agency (KCNA).

He said that "the US imperialists caught the noose around their necks due to their reckless military confrontation racket".

But Kim hinted he would hold off on the plan to test-fire missiles towards the US Pacific island territory, saying he would "watch a little more the foolish and stupid conduct of the Yankees spending a hard time of every minute of their miserable lot".

"In order to defuse the tensions and prevent the dangerous military conflict on the Korean peninsula, it is necessary for the US to make a proper option first and show it through action, as it committed provocations after introducing huge nuclear strategic equipment into the vicinity of the peninsula", he was quoted as saying by KCNA.

He urged the US to "stop at once arrogant provocations" against the North and not provoke it any longer.

- War of words -
North Korea's military said last week that it would finalise by mid-August its detailed plan to test-fire four intermediate-range ballistic missiles in an "enveloping fire" around Guam and report it to its leader for approval.

Tensions have been mounting since the North tested two intercontinental ballistic missile tests last month, which appeared to bring much of the US within range.

Responding to the tests, US President Donald Trump warned Pyongyang of "fire and fury like the world has never seen".

The North in turn threatened to test-fire its missiles towards the US Pacific island of Guam.

The war of words has sparked global alarm, with world leaders including Chinese President Xi Jinping urging calm on both sides.

South Korean President Moon Jae-In also waded in on Monday, calling for calm in the standoff with North Korea, saying there should never be another war on the peninsula.

US Defense Secretary Jim Mattis warned Monday that an attack against the United States could quickly escalate into war, as he and Secretary of State Rex Tillerson moved to dial down tensions.

Mattis's comments came after they said in an opinion piece in The Wall Street Journal that America has "no interest" in regime change in Pyongyang or the accelerated reunification of the two Koreas, and stressed the importance of a diplomatic solution to the crisis.

The two statesmen decided to write the piece a couple of weeks ago, and it had not been in response to last week's heated rhetoric, Mattis said.

Mattis and Tillerson said the United States favors a diplomatic solution to the nuclear stand-off, especially with help from China, though they stressed diplomacy is "backed by military options."