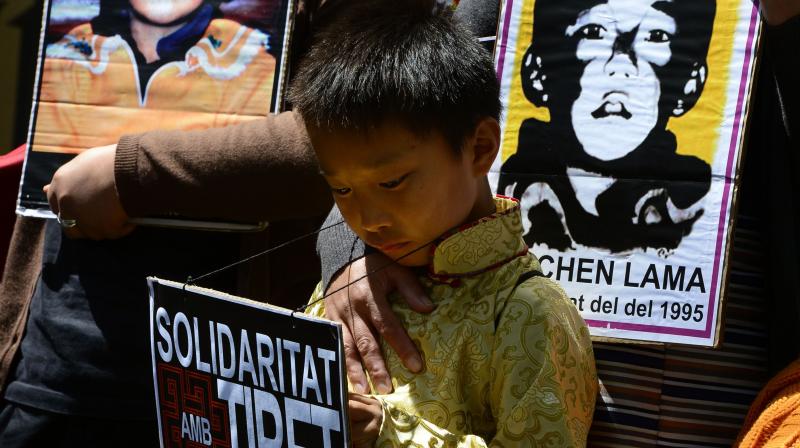 Pro-Tibetan protestors hold picures of Gendun Cheokyi Nyima (The Panchen Lama) during a demonstration outside the Chinese consulate in Barcelona. (AFP)

Washington: The United States has urged China to release Tibetan Buddhism's 11th Panchen Lama, who was taken into captivity at the age of six by Chinese authorities.

"We do not have any idea of the whereabouts, and yes, we continue to press the Chinese authorities to release the Panchen Lama and to let him free, and let the world know where he is," Ambassador-at-Large for International Religious Freedom Sam Brownback told reporters during a conference call on Thursday.

"And this takes on an increased interest as China continues to assert the right to appoint the next Dalai Lama, which they do not have the right to do," Brownback said in response to a question.

Meanwhile, the United States Commission on International Religious Freedom (USCIRF), in a statement, reiterated its call for the State Department to fill the vacancy for the Special Coordinator for Tibetan Issues.

The appointment of the Special Coordinator for Tibetan Issues is mandated by the Tibetan Policy Act of 2002, however, this position has been vacant since January 20, 2017.

Previous Special Coordinators have been crucial to raising the profile of religious freedom issues in Tibet and mobilising government resources to address the issue, it said.

We need to utilise all of the policy tools available, including the position of Special Coordinator for Tibetan Issues, to confront this grave threat to religious freedom, he said.