Toppled Malaysian leader Najib Razak returned to court for the second day of his high-profile corruption trial on Monday. 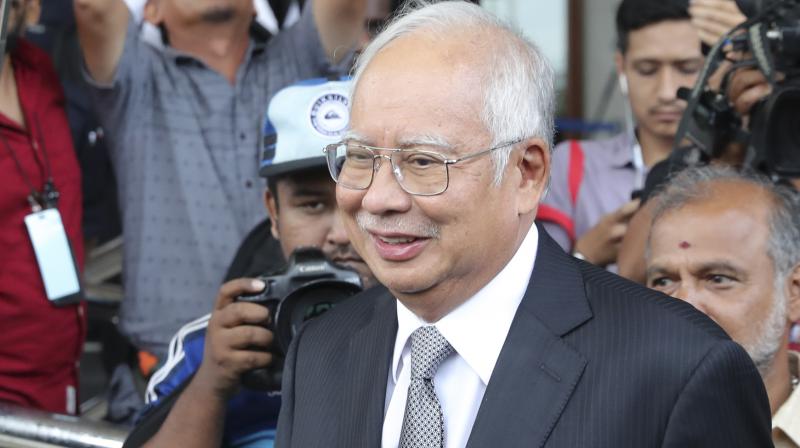 The ex-prime minister and his cronies are accused of stealing billions of dollars from 1MDB. (Photo:AP)

The 65-year-old finally went on trial this month over his alleged role in looting the investment vehicle, the first of several court cases he is expected to face over the controversy.

The ex-prime minister and his cronies are accused of stealing billions of dollars from 1MDB and spending it on everything from high-end real estate to artworks and a luxury yacht. The allegations played a large part in prompting voters to oust his corruption-plagued coalition, which had been in power for six decades, at historic elections last year.

Since then, Najib has been arrested and hit with dozens of charges over the scandal. The ex-leader's highly-anticipated trial began on April 3, with Najib denying seven charges related to the theft of 42 million ringgit (USD 10.2 million) from SRC International, a former 1MDB unit. It is just a fraction of the money Najib is accused of stealing -- he has also been charged in a separate case over the alleged transfer of USD 681 million to his bank account.

He arrived at the High Court in Kuala Lumpur Monday for the second day of proceedings, wearing a dark suit and tie, and passed through a scrum of journalists before entering the courtroom and taking his seat in the dock.

The main witness called Monday was Azizul Adzani Abdul Ghafar, an investigating officer from the central bank, who was part of a team that raided the branch of a local lender, AmBank. The officers seized documents related to accounts held by Najib at the bank, accounts belonging to SRC International, and accounts held by another company. The stolen money from SRC was allegedly sent to Najib's accounts at AmBank.

Earlier Najib's defence team cross-examined Companies Commission of Malaysia official Muhamad Akmaluddin Abdullah, who had testified when the trial opened, on matters related to SRC's records. After the trial was adjourned for the day, Najib's chief lawyer Muhammad Shafee Abdullah said the prosecution would have to prove the ex-leader knew the money flows were illicit to convict him.

"There can be many transactions. The issue is does (Najib) know the exact thing that is going on, does he know in fact it is from illegal sources?" he told reporters outside court.

"The prosecution need to show that he is complicit, that he is part of the conspiracy." Najib has consistently denied any wrongdoing over the looting of 1MDB. Prime Minister Mahathir Mohamad, who came out of retirement to lead an alliance to a shock election victory against Najib's government last year, has pledged to bring Najib to justice and recoup the huge sums of cash stolen from 1MDB.

The US Department of Justice, which is investigating the 1MDB controversy as money was allegedly laundered through the American financial system, believes USD 4.5 billion in total was looted from the fund. Malaysia has also charged Wall Street titan Goldman Sachs over the scandal, alleging the bank and its former employees stole billions of dollars from 1MDB.