More than 500 people have been investigated for drug use and sexual assault and more than 200 arrested in nationwide roundup since Feb 25. 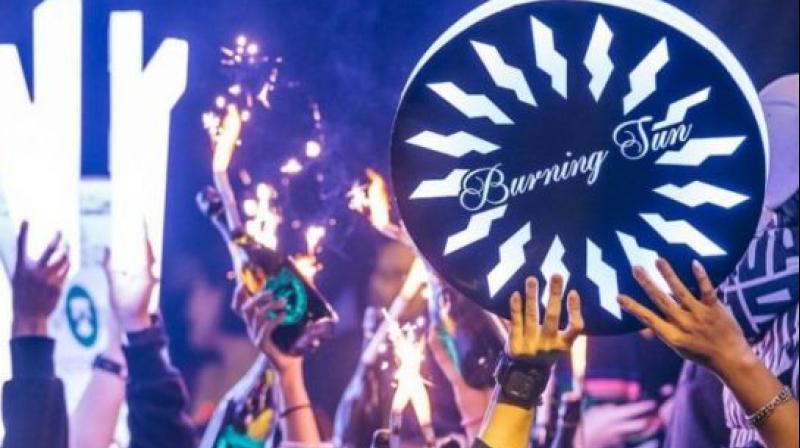 The investigations, revolving around two Gangnam clubs, Burning Sun and Arena, began late last year when 29-year-old film art director Kim Sang-kyo says he tried to stop an incident of sexual harassment and was attacked by Burning Sun staff, and then abused by police who instead arrested him. (Photo: Club Burning Sun | Facebook)

Seoul: On a recent weekend night, the dance floor at one of the hottest clubs in Seoul's swanky Gangnam district held only a few dozen people surrounded by mostly empty tables.

A few months ago, the nightclub would have been packed with hundreds of gyrating men and women, and full tables, many costing 650,000 won (USD 570) or more for a night of drinking and dancing.

The world was introduced to Gangnam by the 2012 K-pop hit "Gangnam Style," a parody of the South Korean highlife with a viral tune and amusing dancing that became the first video to reach a billion views on YouTube.

But a wave of sex crimes and other illegal activity has revealed a dark underbelly in the district, driving club-goers and celebrities away.

According to police investigators, a network of pop stars, businessmen and cops are alleged to have colluded and enabled tax evasion, bribery, and prostitution at some of Gangnam's glitziest clubs.

Most seriously, some are being investigated over the use of date rape drugs to incapacitate women and assault them, sometimes filmed by hidden cameras.

"There aren't many people coming to Gangnam (clubs) right now," a worker told Reuters at a club that was relatively quiet, despite not being implicated in any of the allegations. "There's an investigation on."

The scandals have already led to the resignation of four K-pop stars, the closure of one of Gangnam's most lucrative club, and investigations into at least six police officers suspected of colluding with club operators.

More than 500 people have been investigated for drug use and sexual assault and more than 200 arrested in a nationwide roundup since February 25.

Tax authorities have launched investigations into 21 clubs and host bars for possible evasion.

"If we don't set this right, we cannot call this a just society," Moon said.

The investigations, revolving around two Gangnam clubs, Burning Sun and Arena, began late last year when 29-year-old film art director Kim Sang-kyo says he tried to stop an incident of sexual harassment and was attacked by Burning Sun staff, and then abused by police who instead arrested him.

A government commission concluded that police in Gangnam violated Kim's rights during his arrest, but Kim is still being investigated for sexual harassment and defamation. He denies any wrongdoing.

Calls to Burning Sun, which closed down after the scandal broke, were not answered, while a man who answered the number listed for Arena hung up when asked for comment. Arena has also been closed since early March for what it said were renovations. Gangnam police declined to comment.

Kim said once he shared his story he began to receive messages from other people who said they had been victimized in Gangnam clubs, and he realised the scope of the problem.

"When people saw me raising questions, they said 'why you? Why now?'" Kim said. "'This has been going on for 10 years, 15 years, and you can't touch it. You can't win.' I've heard a lot of people say this, and I think it's really scary."

The string of scandals gained wider attention when several K-pop stars who had ties to some of the clubs were implicated in crimes unrelated to Kim's arrest.

Singer Lee Seung-hyun, 28, better known by the stage name Seungri, is under investigation for paying for prostitutes in return for favours from foreign businessmen at Arena.

He is also accused of embezzlement at another club he was involved with until last year.

Lee has denied all wrong doing, but resigned from his position as a member of the boy band BIGBANG. Lee's lawyer told Reuters this week his client maintains his innocence.

At least three other K-pop stars resigned after they were accused by police of sharing illicitly filmed sex tapes. It is not yet clear whether any of the shared videos and photos were taken at either nightclub.

One singer, Jung Joon-young admitted to having shared videos he took secretly while having sex with women.

"I am truly sorry. I committed a crime that cannot be forgiven," Jung read from a handwritten statement on March 21.

Besides Seungri, who was an internal director at Burning Sun and previously helped run the club, police are investigating two of the club's co-presidents and an operating director for various crimes including distributing drugs, assaulting a customer, and bribing police.

Investigators have also questioned 15 people and arrested four people with links to Burning Sun on drug charges. At least one club promoter was arrested for distributing illegal sex videos.

Kang and other Arena executives are accused of tax evasion by avoiding paying 16.2 billion won (USD 14.31 million) in taxes between 2014-2017. Kang refused to answer questions on March 25 as he emerged from court. He could not be reached for comment.

Six officers are now under investigation for possible collusion with the clubs, including a senior superintendent, lawmakers briefed by Police Commissioner General Min Gab-ryong said.

The superintendent, surnamed Yoon, admitted playing golf and sharing meals with a man known to be Seungri's business partner, but denies all allegations of corruption.

He is accused of leaking confidential information and accepting bribes, including K-pop concert tickets from singer Seungri, an official at the Seoul Metropolitan Police Agency said.

In Gangnam, former patrons and workers lament the impact the scandals have had on the clubs and the broader entertainment industry, a key identity and export for South Korea.

"People are like, why would you go when you know there are so much drugs, GHB, rape going on?," she said, referring to a known date-rape drug. "And they have a point."