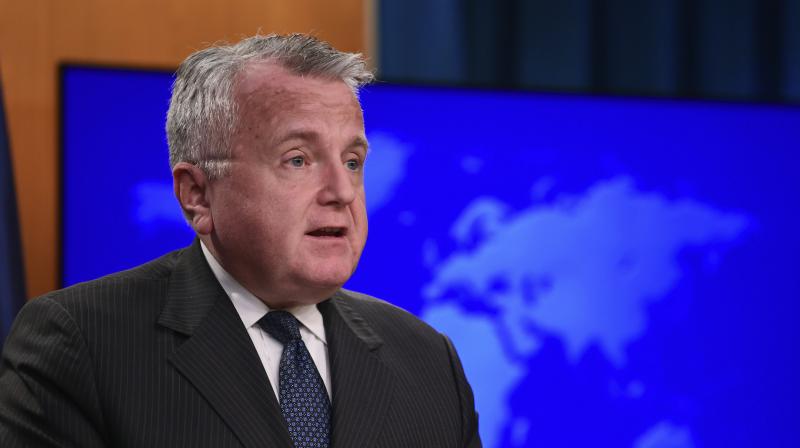 Deputy Secretary of State John J Sullivan made a trip to Bhutan this week. (Photo: AP)

Washington: Deputy Secretary of State John J Sullivan made a trip to Bhutan this week, during which the US underscored the importance of protecting and enhancing a rule-based order in the Indo-Pacific region.

The deputy secretary of state, who visited Bhutan's capital Thimphu from August 12 to 13, is the highest-ranking American diplomat in two decades to visit this nascent Himalayan democracy.

Troops of India and China were locked in a 73-day-long standoff in Doklam, a valley at the trijunction between Bhutan, India and China, from June 16 last year after the Indian side stopped the building of a road in the disputed tri-junction by the Chinese Army. Bhutan and China have a dispute over Doklam. The face-off ended on August 28.

In his meetings, Sullivan discussed a range of issues, "including the importance of protecting and enhancing a rule-based order in the Indo-Pacific region," State Department Spokesperson Morgan Ortagus said.

"He also discussed the importance of expanding our two nations' people-to-people ties and enhancing joint efforts to combat trafficking of persons," she said.

Meanwhile, US Secretary of State Mike Pompeo tweeted, "Thrilled that my deputy, John Sullivan, is visiting Bhutan this week -- the highest-level official to visit in over two decades -- underscoring the US respect for Bhutan as a key partner and contributor in advancing a rules-based order in the Indo-Pacific."

In a meeting with the Loden Foundation, Sullivan learned about efforts being undertaken to promote entrepreneurship and cultural preservation in Bhutan. He affirmed the United States' support for science, technology, engineering and math activities that aim to benefit Bhutanese students, teachers, engineers, scientists, and entrepreneurs, Ortagus said.