Passenger plane skids off runway in northern Turkey, gets stuck on cliff edge

Pegasus Airlines confirmed there were no injuries among 162 passengers as well as two pilots and four cabin crew onboard. 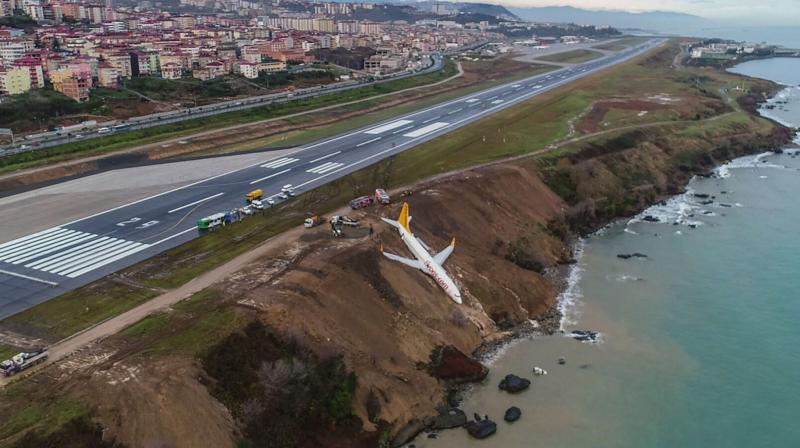 Passenger plane skidded off runway just metres away from sea as it landed at an airport in northern Turkey. (Photo: AFP)

Ankara: A passenger plane late Saturday skidded off the runway just metres away from the sea as it landed at an airport in northern Turkey, local media images showed.

The Pegasus Airlines flight had taken off smoothly from the capital Ankara and landed in Trabzon, but skidded off the runway in the northern airport. No one was injured or killed in the landing.

Dramatic images from CNN Turk broadcaster showed the plane dangerously hanging off a cliff several metres (feet) from the Black Sea, its wheels stuck in mud.

Other images from Dogan news agency showed smoke emanating from the trapped plane.

Pegasus Airlines confirmed in a statement on Sunday that there were no injuries among the 162 passengers onboard as well as two pilots and four cabin crew after they were evacuated.

The cause of the incident was not known but an investigation is under way, the Trabzon governor's office said.

One of the passengers, Fatma Gordu said panic erupted onboard during the landing.

"We tilted to the side, the front was down while the plane's rear was up. There was panic; people shouting, screaming," she told state-run news agency Anadolu.

The airport was temporarily shut before reopening on Sunday morning.