Modi is scheduled to have a bilateral one-on-one hour-long meeting with Trump on the sidelines of the ASEAN summit on Monday afternoon. 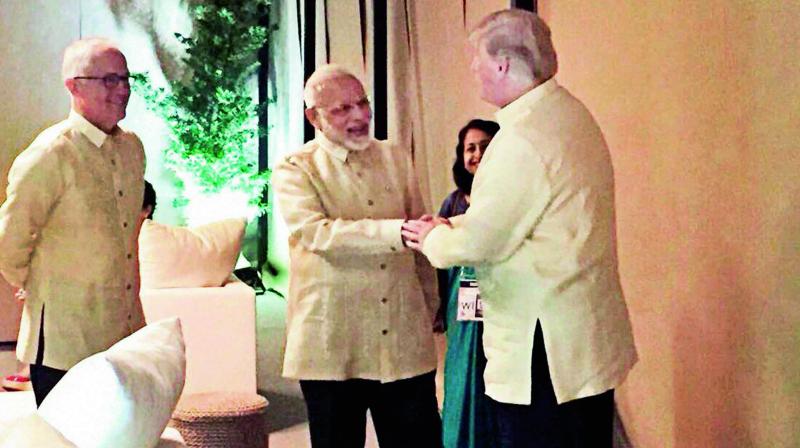 New Delhi/Manila: In a significant move indicating the first steps towards the formation of a “quadrilateral” comprising India, the United States, Australia and Japan, senior officials of the four nations met on Sunday in Manila ahead of the East Asia Summit there.

Prime Minister Narendra Modi, who reached Manila on Sunday, held separate “pull-aside” meetings with US President Donald Trump and Chinese Premier Li Keqiang on the sidelines of the gala dinner to mark the 50th anniversary of Asean in the evening hosted by Philippines President Rodrigo Duterte. Mr Modi was also seen conversing with Japanese Prime Minister Shinzo Abe, Russian PM Dmitry Medvedev and Malaysian PM Najib Razak at a reception for the leaders who have arrived here for the 31st Asean summit and its related meetings. Mr Modi later tweeted pictures of his interaction with several other world leaders.

Mr Modi is scheduled to have a bilateral one-on-one hour-long meeting with the US President on the sidelines of the Asean summit on Monday afternoon. The two leaders are expected to deliberate on a number of key issues of mutual interest, including the evolving security situation in the Indo-Pacific region where Washington favours a greater role by India.

At Sunday evening’s dinner, Mr Modi and the other leaders wore Barong Tagalong, an embroidered shirt which is the national dress of the Philippines, designed by renowned Filipino designer Albert Andrada.

At the Quadrilateral session, officials of the four nations met “for consultations on issues of common interest in the Indo-Pacific region”, with “the discussions focused on cooperation based on their converging vision and values for promotion of peace, stability and prosperity”. The four countries “agreed that a free, open, prosperous and inclusive Indo-Pacific region serves the long-term interests of all countries in the region and of the world at large”. The formation of a Quadrilateral was a recent Japanese proposal and is being viewed by foreign policy experts as an attempt to rein in China, which has been asserting its might militarily and economically in its neighbourhood.

The reference to the importance of peace and stability as also inclusiveness in the “Indo-Pacific” region is being seen as a reaction and veiled reference to the assertive Chinese military posture in the area. China has maritime disputes with several Southeast Asian nations as well as with Japan. Following the Japanese proposal, New Delhi indicated it was open to such an idea, pointing out that it was already part of several trilateral consultation processes. The term “Indo-Pacific” also seems to have replaced the term “Asia-Pacific”, highlighting the rising importance of India in US strategy in the region.

In a statement, the external affairs ministry said: “Officials from India’s ministry of external affairs, Australia’s department of foreign affairs, Japan’s ministry of foreign affairs and the US department of state met in Manila on November 12, 2017 for consultations on issues of common interest in the Indo-Pacific region. The discussions focused on cooperation based on their converging vision and values for promotion of peace, stability and prosperity in an increasingly inter-connected region that they share with each other and with other partners.”

The MEA added: “They agreed that a free, open, prosperous and inclusive Indo-Pacific region serves the long-term interests of all countries in the region and of the world at large. The officials also exchanged views on addressing common challenges of terrorism and proliferation linkages impacting the region as well as on enhancing connectivity. The Indian side highlighted India’s Act East policy as the cornerstone of its engagement in the Indo-Pacific region.”