Minister Agha Umar Bungalzai said candidate Siraj Raisani was killed and more than 120 were also wounded in the bombing. 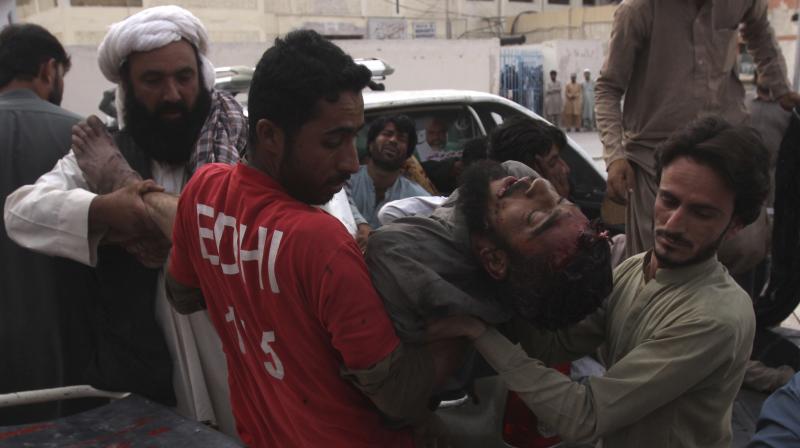 Earlier, four people were killed and 20 others wounded in a bombing near the rally of Akram Khan Durrani, who is running for a seat in parliament from the northwestern city of Bannu. (Photo: AP)

Quetta: The death toll in a suicide bombing in southwestern Pakistan Friday jumped to 70, an official said, the deadliest in a string of attacks on political rallies that have raised security fears ahead of nationwide polls.

"Seventy bodies are in six different hospitals and there are more than 120 wounded. Between 15 and 20 are in critical condition," Balochistan health minister Faiz Kakar told AFP.

The blast in the town of Mastung, near the Balochistan provincial capital Quetta, came hours after another bomb killed at least four people at a campaign rally in Bannu in the country's northwest.

Bungalzai also confirmed the explosion killed Siraj Raisani, who was running for a provincial seat with Balochistan Awami Party (BAP).

"Mir Siraj Raisani succumbed to wounds while he was being shifted to Quetta," he added.

Raisani was the younger brother of former provincial chief minister Mir Aslam Raisani.
The explosion comes hours after four people were killed and 39 injured when a bomb hidden inside a motorcycle detonated near a Pakistani politician's convoy in the country's northwest near the Afghan border.

The earlier blast, near the town of Bannu, was targeting the convoy of the Muttahida Majlis-e-Amal (MMA) candidate Akram Khan Durrani, who survived the attack, police said.

Days earlier a bomb claimed by the Pakistani Taliban targeted a rally by the Awami National Party (ANP) in the city of Peshawar on Tuesday. Hospital officials said Friday that the toll in that attack had risen to 22.