Flight BS211 from Dhaka to Kathmandu was carrying 67 passengers and four crew members. 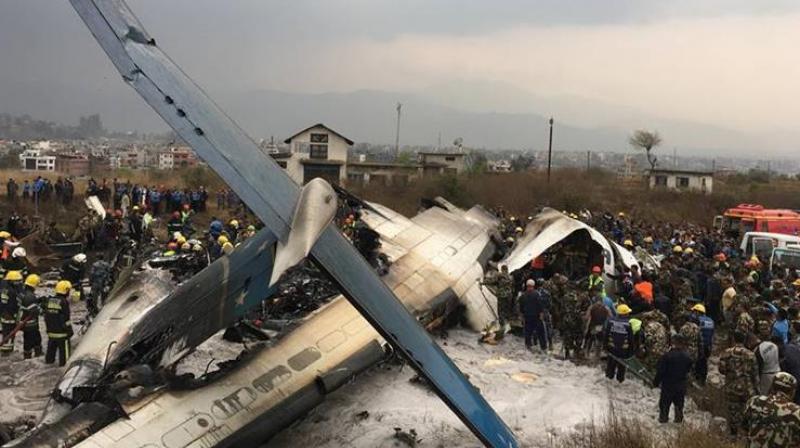 Nepalese rescuers stand near a passenger plane from Bangladesh that crashed at the airport in Kathmandu, Nepal, Monday. (Photo: AP)

Kathmandu: A plane crash at Nepal’s main airport killed 49 of the 71 people on board, police said on Tuesday as an investigation was ordered into the cause of the accident, which occurred after seeming confusion over landing instructions before the plane, flying low and erratically, struck the ground and erupted in flames.

“Looks like they are really confused,” one man says in Nepali talking about US-Bangla Flight BS211.

“They appear to be extremely disoriented,” another man said.

Just before landing the pilot asks, “Are we cleared to land?”

Moments later, the controller comes back on, using a tone rarely heard in such conversations — perhaps even panic — and tells the pilot: “I say again, turn!”

Seconds later, the controller orders fire trucks onto the runway.

Kathmandu airport’s general manager, however, only said on Monday that the pilot did not follow the control tower’s instructions and approached the airport’s only runway from the wrong direction.

“The airplane was not properly aligned with the runway. The tower repeatedly asked if the pilot was OK and the reply was ‘yes,’” Raj Kumar Chetri said.

Flight BS211 from Dhaka to Kathmandu was carrying 67 passengers and four crew members.

Police spokesman Manoj Neupane said on Tuesday that 49 people were confirmed to have been killed and 22 injured. They were being treated in several hospitals in Nepal’s capital. Autopsies on the dead would be done at the Teaching Hospital morgue.

The government has ordered an investigation into the crash. A statement from the prime minister’s office said the six-member team headed by a former government secretary will gather the facts to determine the cause and prevent future crashes.

The plane had circled Tribhuvan International Airport twice as it waited for clearance to land, Mohammed Selim, the airline’s manager in Kathmandu, told Dhaka-based Somoy TV by telephone.

The plane swerved repeatedly as it prepared to land, said Amanda Summers, an American working in Nepal.

“It was flying so low I thought it was going to run into the mountains,” said Summers, who watched the crash from the terrace of her home office, not far from the airport in Kathmandu’s valley. “All of a sudden there was a blast and then another blast.”

Fire crews put out the flames quickly, perhaps within a minute, she said, though for a time clouds of thick, dark smoke rose into the sky above the city.

Nitin Keyal was about to board a domestic flight at the airport when he saw the plane coming in.

“It was flying very low,” said Keyal, a medical student. “Everyone just froze looking at it. You could tell it wasn’t a normal landing.”

He said it landed just off the runway, broke apart and burst into flames. “For a few minutes no one could believe what was happening. It was just terrible,” he said.

US-Bangla spokesman Kamrul Islam said the plane was carrying 32 passengers from Bangladesh, 33 from Nepal and one each from China and the Maldives. He did not provide the nationalities of the four crew members.

US-Bangla operates Boeing 737-800 and smaller Bombardier Dash 8 Q-400 planes, the model of the plane that crashed.

The airline is based in Bangladesh’s capital, Dhaka, and flies domestically and internationally. The parent company, part of US-Bangla Group, is also involved in real estate, education and agriculture.

Kathmandu’s airport has been the site of several deadly crashes. In September 2012, a Sita Air turboprop plane carrying trekkers to Mount Everest hit a bird and crashed shortly after take-off, killing all 19 on board.