The fellow Muslim country will provide oil worth $ 3 billion to Pakistan for three years. 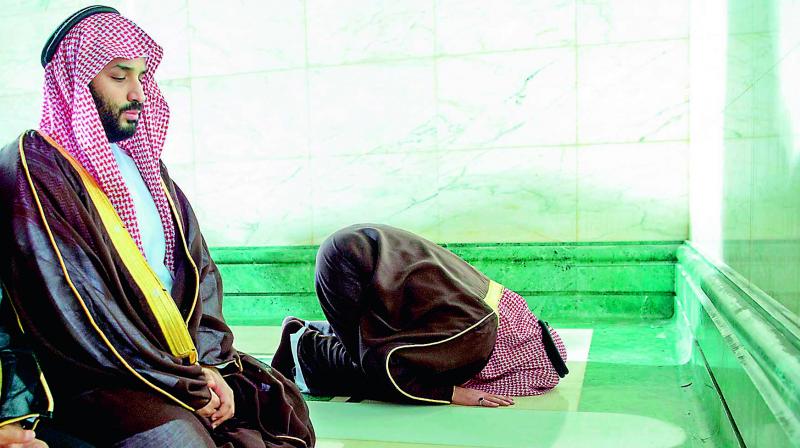 Saudi Crown Prince Mohammed Bin Salman (L) praying inside the Kaaba (The Cube), Islams holiest shrine, at the Grand Mosque in Saudi Arabias holy city of Mecca, during his inspection of expansions to the site. (Photo: AFP)

Deals with Saudi Arabia have been finalised to get oil on loan. The fellow Muslim country will provide oil worth $ 3 billion to Pakistan for three years.

Meetings will be held with Mohammed bin Salman to hand over two power plants based on Liquefied Natural Gas (LNG) to Saudi Arabia, with an expected investment of $2 billion. Saudi Arabia is also interested to invest $6 billion in Gwadar oil refinery.

The refinery and oil complex in the strategic Gwadar Port on the Arabian Sea is the ultimate destination for the massive multi-billion dollar China Pakistan Economic Corridor, which lies not far from the Indo-Iranian port of Chabahar.

Earlier, teams of security, media and doctors of Mohammed bin Salman reached Islamabad ahead of his two-day visit to Pakistan. Details suggest that the security teams visited several areas of the capital and reviewed the situation.

Besides this, five trucks full of Saudi Crown Prince's personal amenities also arrived in Islamabad that include his exercise equipment, furniture and other personal belongings.

Mohammed bin Salman will likely stay at the Prime Minister's House, however; two of the top hotels in Islamabad have been booked fully for members of his staff while two others have been partially booked.

The Prince will reach Islamabad on February 16 as a result of an invitation extended to him by Prime Minister Imran Khan. This will be Prince Mohammed s first-ever visit to Pakistan as the crown prince.

The meeting discussed matters pertaining to the regional and international security, and effective measures taken by the coalition for countering terrorism.

Prime Minister Imran Khan reiterated his commitment to bring enduring peace and stability in Pakistan while supporting all peace initiatives for regional peace. PM emphasised greater regional cooperation to eradicate violence and extremism. PM appropriated IMCTC charter for its efforts towards counter violent extremism. Mr Sharif assured the PM that the alliance would continue its efforts to eradicate terrorism.

Earlier, general Sharif called on Foreign Minister Shah Mehmood Qureshi at the Ministry of Foreign Affairs. He apprised Mr Qureshi of the measures that were being taken by the coalition in order to combat terrorism, a statement issued by the Foreign Office read.