The blast was so powerful that it was heard several kilometers from the place of occurrence. 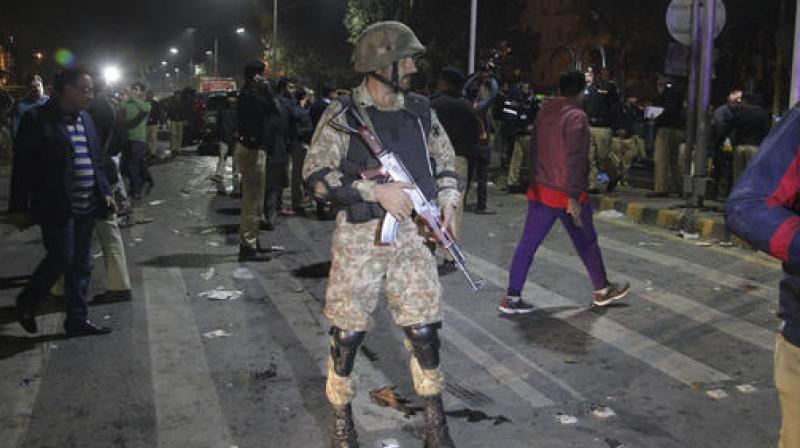 olice and security officers cordon off the area of a deadly bombing, in Lahore. (Photo: AP)

Lahore: At least 10 people, including two top police officers, were killed and nearly 40 others injured when a suicide bomber blew himself up during a protest rally outside the Punjab Assembly building here in eastern Pakistan. Lahore Traffic Police chief capt (R) Mobeen Ahmedand Senior Superintendent Police Lahore Zahid Gondal were killed in the blast that targted police personnel.

At least 10 people were killed and as many as 40 were injured in the powerful blast that ripped through a protest rally of chemists, police officials said.

"Deputy Inspector General and Lahore police chief Mobeen Ahmed has been killed in the blast," Lahore police chief Amin Wains confirmed. He, however, did not confirm about other casualties. "I can confirm the death of Mr Ahmed at the moment," Wains said.

DIG Ahmed had survived an attempt to his life during his posting in Balochistan. A Lahore police officer told PTI that apparently it was a suicide attack and the bomber targeted the police personnel present there.

"The target was not the protest demonstration but the police officers," he added. Punjab Law Minister Rana Sanullah confirmed that it was suicide blast and 'somepolice officers' have been killed.

The blast was so powerful that it was heard several kilometers from the place of occurrence. "The chemists were protesting against the controversial drug regulations the government has recently imposed when a powerful blast took place. Several protesters were lying on the road before the rescuers shifted them," said Ishtiaq Ahmed, a representative of the LahoreChemist Association.