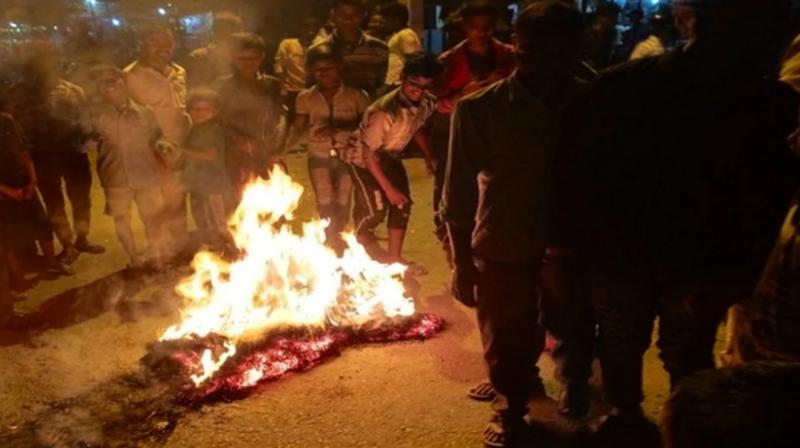 Chinese President Xi Jinping’s effigy was burnt on Monday during a protest against Beijing for encroaching upon a chunk of Nepal’s land. (Photo: ANI)

Bardiya: Chinese President Xi Jinping’s effigy was burnt on Monday during a protest against Beijing for encroaching upon a chunk of Nepal’s land.

The protestors held play-cards, banners and chanted slogans such as “Go back China and Return Nepali land” during the protests.

The protest comes after a survey report recently released by the Survey Department stated that China has encroached upon 36 hectare land of Nepal.

Similarly, around six hectares of Nepali land in Sanjen river and Jambhu Khola of Rasuwa, have also fallen into Kerung in southern Tibet.

China has also encroached more than 10 hectares of land in Sindhupalchowk district’s Bhotekoshi and Kharanekhola areas, which are now under Nyalam area of Tibet, the report said.

In Sankhuwasabha, nine hectares of land have been encroached due to the road expansion in the autonomous region of Tibet where areas around Kamukhola, Arun river and Sumjung river have now fallen into Tingisyan County area.

The survey data further divulged that some places near Arun Khola, Kamu Khola and Sumjung are now parts of Tibet’s Tingisyan area.

According to the ministry’s data, Nepal would lose several hundred hectares of land to China.