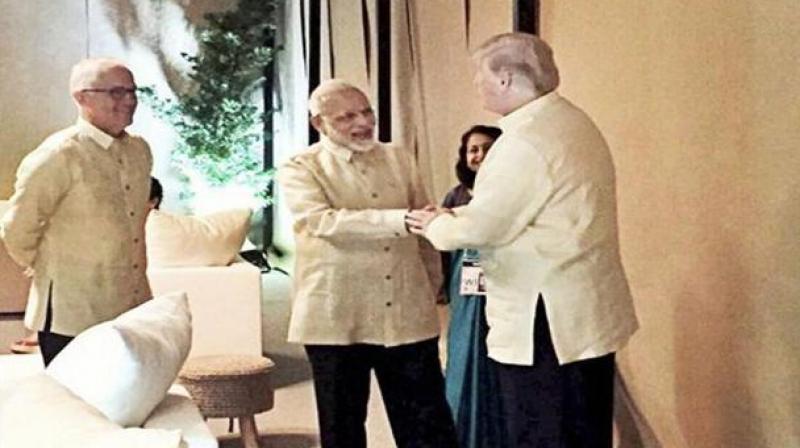 The brief interaction between Modi and Trump came ahead of their scheduled bilateral meeting on Monday. (Photo: Twitter/MEA)

Manila: Prime Minister Narendra Modi on Sunday held separate pull-aside meetings with US President Donald Trump and Chinese Premier Li Keqiang on the sidelines of a gala dinner to mark the 50th anniversary of the Association of South East Asian Nations (ASEAN).

He also held brief interactions with several other leaders who attended the reception hosted by Philippine President Rodrigo Duterte at the mega SMX Convention Centre in Pasay City here.

The prime minister as well as all other leaders wore Barong Tagalong, an embroidered shirt which is the national dress of the Philippines. Renowned Filipino designer Albert Andrada has designed the shirts.

Modi also tweeted pictures of his interaction with several leaders.

The brief interaction between Modi and Trump came ahead of their scheduled bilateral meeting on Monday. The two leaders are expected to deliberate on a number of key issues of mutual interest including the evolving security situation in the Indo-Pacific region where Washington favours a greater role by India.

There have been concerns over China's growing military presence in the Indo-Pacific and the issue was understood to have figured in a meeting of officials from India, the US, Japan and Australia on Sunday, under the proposed Quadrilateral coalition of the four countries.

"The discussions focused on cooperation based on their converging vision and values for promotion of peace, stability and prosperity in an increasingly inter-connected region that they share with each other and with other partners," the ministry of external affairs said in a statement.

"They agreed that a free, open, prosperous and inclusive Indo-Pacific region serves the long-term interests of all countries in the region and of the world at large," it said.

On Tuesday, Modi will attend the ASEAN-India and East Asia summits where he is likely to reassert India's push for crafting a global approach to deal with growing challenge of terrorism and radicalisation besides pitching for steps to boost regional trade.

Modi will hold bilateral meetings with Duterte on Monday. He also had a conversation with Li at the dinner.

"PM @narendramodi had a warm and cordial conversation with the Chinese Premier Li Keqiang at the Gala Dinner," MEA spokesperson Raveesh Kumar tweeted.

PM @narendramodi had a warm and coordial conversation with the Chinese Premier Li Keqiang at the Gala Dinner. #ASEAN2017 pic.twitter.com/SzxLHoyzTC