Mass rally kicks off in Seoul calling for Park's ouster

Police anticipated about 170,000 people to turn out near City Hall and an old palace gate. 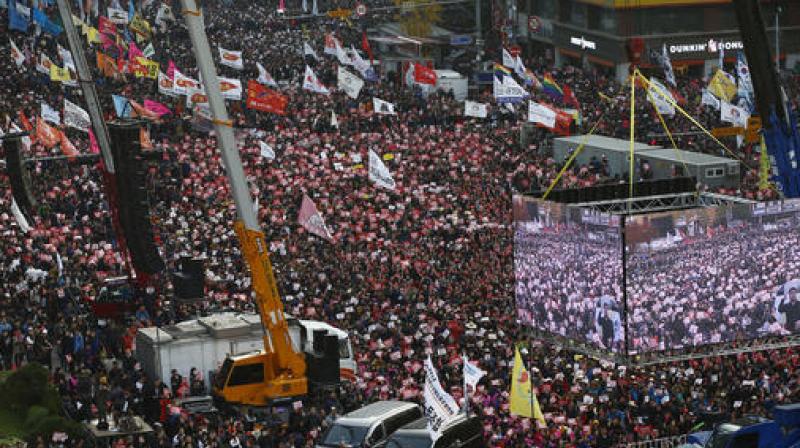 The protest on Saturday is expected to be the largest in the capital since June 10, 2008, when police said 80,000 people took part in a candlelight vigil. (Photo: AP)

Seoul: Tens, and possibly hundreds, of thousands of South Koreans marched in Seoul on Saturday demanding the ouster of President Park Geun-hye in one of the biggest protests in the country since its democratization about 30 years ago.

Police anticipated about 170,000 people to turn out near City Hall and an old palace gate while the protest organisers estimated as much as a million are taking part.

It's the latest of a wave of massive rallies against Park, whose presidency has been shaken by suspicion that she let a shadowy longtime confidante to manipulate power from behind the scenes.

Park's friend, Choi Soon-sil, the daughter of a late cult leader who emerged as Park's mentor in the 1970s, is also suspected of exploiting her presidential ties to bully companies into donating tens of millions of dollars to foundations she controlled.

Despite rising public anger, opposition parties have yet to seriously push for Park's resignation or impeachment over fears of negatively impacting next year's presidential race. However, they have threatened to campaign for resignation if she doesn't distance herself from state affairs.

The protest on Saturday is expected to be the largest in the capital since June 10, 2008, when police said 80,000 people took part in a candlelight vigil denouncing the government's decision to resume U.S. beef imports amid persisting mad cow fears. Organizers then estimated the crowd at 700,000.

In the summer of 1987, millions of South Koreans rallied in Seoul and other cities for weeks before the then-military government caved in to demands for free presidential elections.

In an attempt to stabilize the situation, Park on Tuesday said she would let the opposition-controlled parliament choose her prime minister. But opposition parties say her words are meaningless without specific promises about transferring much of her presidential powers to a new No. 2.

Prosecutors have arrested Choi, one of her key associates and two former presidential aides who allegedly helped Choi interfere with government decisions and amass an illicit fortune at the expense of businesses.

Prosecutors also on Friday summoned the chairman of steelmaker POSCO over allegations that Choi and her associates tried to forcibly take over the shares of an advertisement company previously owned by the steelmaker.On Tuesday, they raided the headquarters of smartphone giant Samsung Electronics, the country's largest company, which is under suspicion of spending millions of dollars illicitly financing the equestrian training of Choi's athlete daughter.

Under South Korea's criminal litigation law, which requires suspects to be either indicted or released within 20 days of their arrest, prosecutors have until Nov. 20 to formally charge Choi.

There is also a possibility that prosecutors will eventually investigate Park, who in a televised apology last week said she would accept a direct investigation into her action. The president has immunity from prosecution except in cases of treason, under South Korean law, but she can be investigated.

Park has 15 months left in her term. If she steps down before the end of it, an election must be held within 60 days.