World   Asia  12 Sep 2019  British woman sets off balloon in memory of father, it lands 1700 kilometers away in Poland
World, Asia

British woman sets off balloon in memory of father, it lands 1700 kilometers away in Poland

Gach's daughter Dominika told the AP that the family plans to frame the balloon and hang it on a wall. 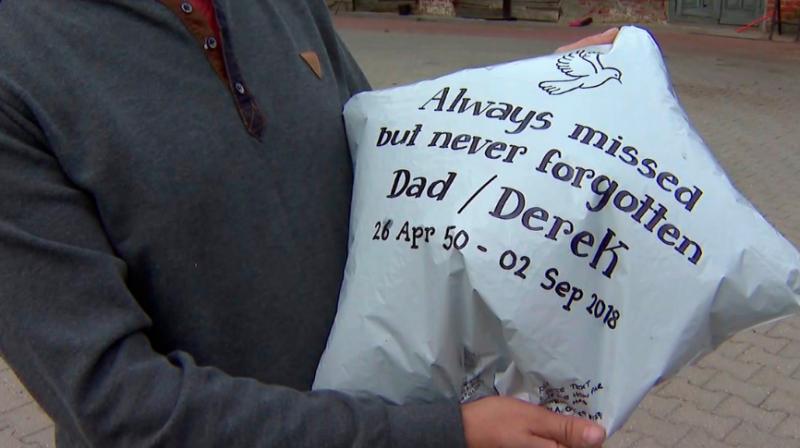 An English woman released a helium balloon into the sky over Birmingham, England, to commemorate the first anniversary of her father's death. (Photo: AP)

An English woman released a helium balloon into the sky over Birmingham, England, to commemorate the first anniversary of her father's death.

She had no idea it would travel more than 1,000 miles (1,700 kilometers), crossing land and sea to end up days later in a field in northern Poland, where a farmer found it and was moved by the gesture of a grieving daughter.

"Sometimes when I speak to my dad, I look up into the sky. So the balloon, I hoped it would travel up there to him," Nicola Bowler, a nurse, said. "My dad wasn't very well-traveled. He didn't go very far. So to see how far this has traveled would mean loads to him. He'd be laughing at all this."

Bowler and her husband released a number of standard small helium balloons on September 2 along with one special star-shaped balloon printed with the words: "Always missed but never forgotten Dad / Derek, 26 Apr 50 - 02 Sep 2018." On a whim, she hand-wrote another message with her phone number: "Please text me to see how far my dad has traveled. Nicola."

The balloon got caught immediately in trees surrounding the cemetery where Derek Wood, who died at the age of 68 from cancer, now rests. Bowler's husband coaxed it out and it moved onward. She never thought the balloon would make it very far at all.

But travel it did, all the way to Troszkowo, a village located in an area of northeastern Poland dotted with lakes where farmer Radoslaw Gach found it lying on the ground near his home, not far from where his cows graze.

"It made me feel a bit sad and a bit happy that the daughter remembers her father and on the anniversary of his death releases such information," he said. He sent a text to the number with the help of his daughter who speaks English, taking Bowler by surprise.

"Somebody texted me saying 'your dad has travelled to this village' that I can't even pronounce in Poland and initially I thought 'Oh my God that's amazing' and then I thought, 'Is somebody pulling my leg, just saying that,'" Bowler told The Associated Press in an interview from the cemetery in Birmingham, where her father's grave is covered in flowers.

"So I actually googled the number that I received the text (from) and it actually was in Poland," she said. "I couldn't actually believe how far the distance was and if it's possible for a balloon to travel that far."

Gach's daughter Dominika told the AP that the family plans to frame the balloon and hang it on a wall.