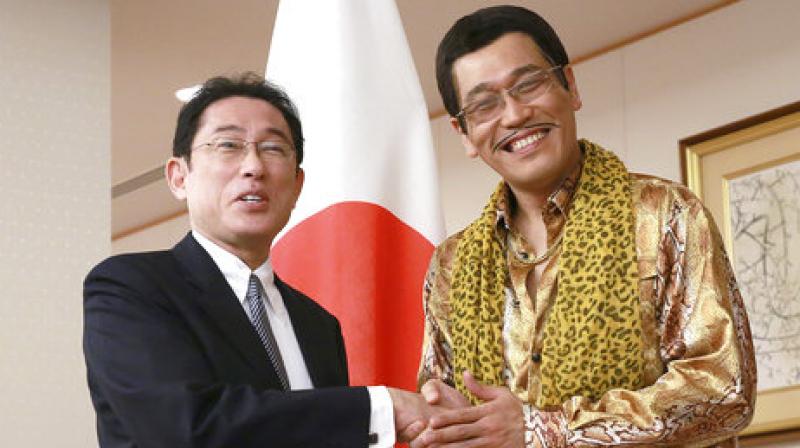 The PPAP star beamed at the invitation to accompany the diplomat to New York and pledged to do his utmost for the awareness campaign. (Photo: AP)

Tokyo: "Pen-Pineapple-Apple-Pen" and the UN are rhyming. Japanese comedian Pikotaro has adapted his catchy song to promote the United Nations' sustainable development goals. The original went viral last year after pop star Justin Bieber tweeted that it was his favourite video.

Pikotaro, in his trademark leopard-lizard design outfit, was a bit reserved at an appearance Wednesday alongside the more conservatively dressed Foreign Minister Fumio Kishida.

The PPAP star beamed at the invitation to accompany the diplomat to New York and pledged to do his utmost for the awareness campaign. They'll debut the UN version, "SDGs," on Monday.

At first, Pikotaro seemed unconvinced. "Do you mean the UN, one that is in New York? Me? Are you sure?" he asks half-jokingly. Kishida reassured him that it is a Japan-hosted reception at the UN headquarters where he will be performing.

The UN action plan sets goals in fighting poverty, climate change and other global challenges. Kishida says he needs to boost awareness for the project in which every citizen needs to help. "Pikotaro-san's popularity would be extremely effective to boost public recognition," Kishida told him.

Pikotaro says it would be a challenge to achieve all the goals, but he is happy to accept the Foreign Ministry's appointment to the promotional role and to help by doing what he does best. "Something easy that encourages people to watch and follow example."

There was no dancing lesson, however. In the PPAP song, Pikotaro mimics stabbing a pen into an apple and a pineapple while singing simple English lyrics and dancing to a catchy beat.