The explosions killed 47 pilgrims, most of them Iraqi Shiites, and 12 Syrian pro-government fighters. 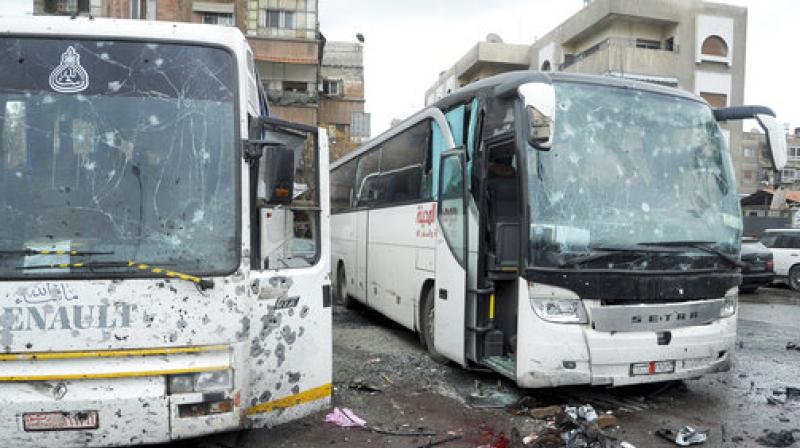 Damascus: Twin bombs targeting Shiite pilgrims killed 59 people in Damascus on Saturday, most of them Iraqis, a monitoring group said of one of the bloodiest attacks in the Syrian capital.

There have been periodic bombings in Damascus, but the stronghold of the regime of President Bashar al-Assad has been largely spared the destruction faced by other major cities in six years of civil war.

A roadside bomb detonated as a bus passed by and a suicide bomber blew himself up in the Bab al-Saghir area, which houses several Shiite mausoleums that draw pilgrims from around the world, the Syrian Observatory for Human Rights said.

"There are also dozens of people wounded, some of them in a serious condition," he said.

It broadcast footage of several white buses with their windows shattered, some charred and peppered with shrapnel.

The Iraqi foreign ministry said around 40 of its nationals were among the dead and 120 among the wounded.

A witness said that the second bomb exploded as passers-by gathered at the scene of the first attack, and state television said a booby-trapped motorcycle was defused nearby.

There was no immediate claim of responsibility.

Shiite shrines are a frequent target of attack for Sunni extremists of Al-Qaeda and the Islamic State (IS) group, not only in Syria but also in neighbouring Iraq.

The foreign ministry in Damascus condemned "the cowardly terrorist attack which comes in response to victories of the Syrian Arab army" against jihadists.

The Sayyida Zeinab mausoleum to the south of Damascus, Syria's most visited Shiite pilgrimage site, has been hit by several deadly bombings during the war.

Twin suicide bombings in the high-security Kafr Sousa district of the capital in January killed 10 people, eight of them soldiers.

That attack was claimed by former Al-Qaeda affiliate Fateh al-Sham Front, which said that it had targeted Russian military advisers working with the Syrian army.