The incursion would be the first on a major Philippine tourist destination in recent years by the Abu Sayyaf group. 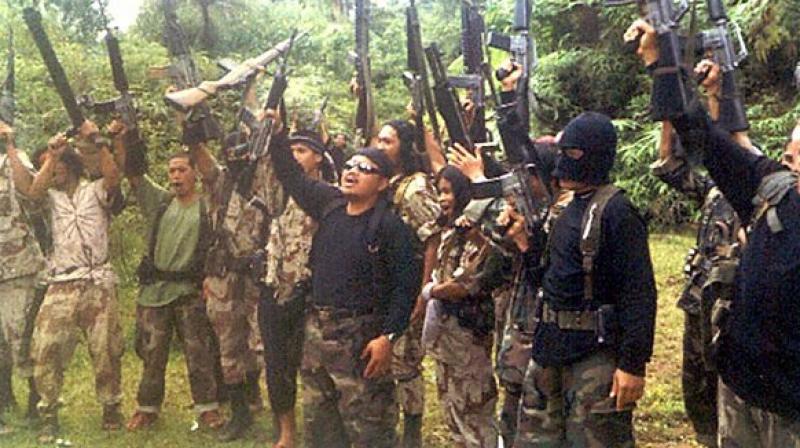 The Abu Sayyaf, which is blacklisted by the US and the Philippines as a terrorist organisation, holds more than a dozen foreign and local hostages. (Photo: AP)

Manila: Five people including a Philippine police officer were killed on Tuesday in clashes with 10 suspected members of the Abu Sayyaf kidnap group on the resort island of Bohol, authorities said.

The incursion would be the first on a major Philippine tourist destination in recent years by the Abu Sayyaf, which has long engaged in kidnappings for ransom -- often targeting foreigners in the lawless southern Philippines.

Five bodies have been recovered at the scene of the fighting, Philippine military spokesman Brigadier-General Restituto Padilla said on ABS-CBN television in Manila.

At least one policeman was confirmed killed in the fight, national police spokesman Senior Superintendent Dionardo Carlos said in a statement.

"Security forces reported that the armed group is well-armed with heavy-calibre weapons, but now cornered in an isolated section" of Bohol, Philippine military chief of staff General Eduardo Ano said in a statement.

It comes after the US and Australian embassies warned their citizens this week about possible kidnappings by "terrorist groups" in the central Philippines.

Bohol is a major tourist destination, where foreign tourists swim with whale sharks and marvel at tiny primates called tarsiers, go on cruises aboard boats on crystal-clear rivers and lounge at white-sand beaches.

Military spokesman Padilla said the army had received information over the past few weeks about "a potential activity on the part of some lawless elements to disturb the peace" in the area.

"The clearing operations are ongoing and we are pouring in more forces to help and assist. We hope to finish this by the end of the day," the spokesman added.

The gunmen sailed into the Bohol town of Inabanga on Monday, going upriver toward a remote section of the island aboard three fast boats, said Inabanga police officer Edwin Melicor on telephone.

"Residents told us the gunmen could have been Muslims because they were aboard boats that are used only in Mindanao," Melicor said, referring to a Muslim-populated southern area.

A clash broke out as police went to investigate early on Tuesday, Melicor added. The Abu Sayyaf, also blamed for deadly bombings, has pledged allegiance to the Islamic State movement that holds large swathes of Iraq and Syria.

Over the past year the Abu Sayyaf has been expanding its activities, boarding commercial and fishing vessels off their southern island stronghold of Jolo, near Malaysia, and abducting dozens of foreign crew members.

They beheaded a German tourist earlier this year and two Canadian tourists last year, all three of them having been seized at sea.