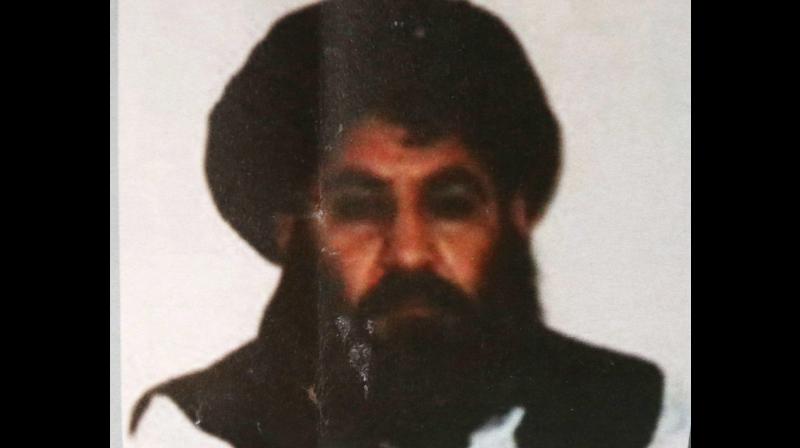 The article, based on an interview of a former Taliban commander, who was close to Mullah Mansour's inner circle, reports insights into the final hours of Mullah Mansour's life, and why and how he was killed, revealing a dangerously-widening rift with his Pakistani sponsors. (Photo: AP)

"Mullah Mansour had resisted orders from Pakistan's intelligence agency, the ISI, to destroy infrastructure - schools, bridges and roads - to increase the cost of the war for the Afghan government. He opposed the promotion of Pakistan's hard-line protege Sirajuddin Haqqani to be his deputy, and he had dodged Pakistan's demands to push its agenda in negotiations," says a New York Times article written by Carlotta Gall and Ruhullah Khapalwak.

The article, based on an interview of a former Taliban commander, who was close to Mullah Mansour's inner circle, reports insights into the final hours of Mullah Mansour's life, and why and how he was killed, revealing a dangerously-widening rift with his Pakistani sponsors.

The account of this Taliban leader was complemented and supported in interviews with two senior Afghan officials, who have conducted their own investigations into the Taliban leader's death - Haji Agha Lalai, presidential advisor and deputy governor of Kandahar and Gen. Abdul Raziq, the police chief of Kandahar Province.

According to the article, Mansour feared assassination by Pakistan before he was killed in an American drone strike.

Hours before his death, Mansour knew something was going wrong so he had called his brother and relatives to prepare them for his death.

Mansour had called his family, while he was on his way home from a secret visit to Iran in May 2016 driving across a remote stretch of southwestern Pakistan.

The article, citing Afghans on both sides of the war and a growing number of Western security analysts, said that Pakistan had most likely engineered Mullah Mansour's death to remove a Taliban leader it no longer trusted.

"Pakistan was making very strong demands. Mansour was saying you cannot force me on everything. I am running the insurgency, doing the fighting and taking casualties and you cannot force us," the article quotes the former Taliban commander, as saying.

After Mullah Mansour's death, Mawlawi Haibatullah Akhundzada, an Islamic cleric with no military experience, was selected as leader of the Taliban.

"Ninety percent of the Taliban blame the Pakistanis," the former Taliban commander said, adding, "but they cannot say anything. They are scared."

The article says that Mansour relied on Pakistan's Intelligence Service and donors from Arab gulf states, as well as Afghan drug lords, for the main financing of the Taliban, but he was also seeking weapons and other support from Iran, and even Russia.

"Mullah Mansour's outreach to Iran was also aimed at getting the Taliban out from under Pakistan's thumb, according to his former associate and Afghan officials, so he could maneuver to run the war, but also negotiate peace, on his own terms. That was where his differences with Pakistan had grown sharpest," it adds.

The article further says that Mansour wanted to devolve more power to regional Taliban commanders, allowing them to raise their own funds and make their own decisions, in order to own the Afghan nationalist cause and loosen Pakistan's control over the insurgency.

"Ten days before he was killed, he sent messages to villages and to commanders asking them to share their views on peace talks," said General Raziq, the police chief of Kandahar Province, a fierce opponent of the Taliban, who knew the movement well.

He said Mansour was looking for new protectors as his disagreements with Pakistan were growing.

The article claims that Mansour used to travel on a Pakistani passport, under a fake name, with full knowledge of Pakistani intelligence.

According to the article, 300 extra guards were posted at the crossing and along the highway when Mansour reached the Pakistani side of the border with Iran before his death.

Mansour took a taxi on his arrival in Pakistan for the eight-hour drive to Quetta.

Hellfire missiles fired by an American drone tore into the car which was carrying Mansour, near the small town of Ahmad Wal, where the road runs just 20 miles from the Afghan border.

Workers farming watermelons nearby rushed to the burning wreck and shovelled dirt on the flames, but could not save the men inside, General Raziq said.

"His car was followed," said General Raziq, who conducted his own investigation into the strike.

"The Frontier Corps were following him, and within five minutes of him being hit they reached him, with the media."

"For many in the Taliban, Mullah Mansour's death represented a devastating betrayal by their longtime patron and sponsor, Pakistan that has split and demoralized the ranks," the article says.

Many senior commanders from Mullah Mansour's Pashtun tribe defected to the Afghan government or moved into Afghanistan in fear of further retribution from Pakistan.

The strike against Mullah Mansour was the first time a top Afghan Taliban leader had been killed inside Pakistan, the article concludes, which has provided a sanctuary for Taliban leaders throughout their 16-year insurgency against Afghanistan.