The meeting between Modi and Xi came after India boycotted the high-profile Belt and Road Forum held in Beijing last month. 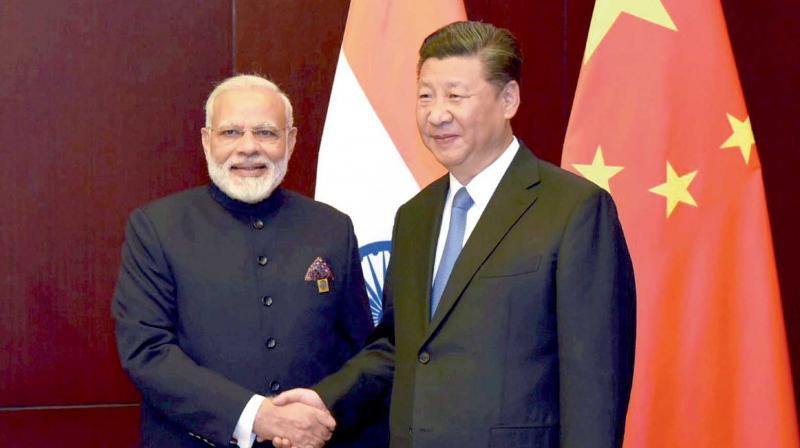 Astana: Prime Minister Narendra Modi on Friday underscored the need to respect each others “core concerns” and appropriately handle the disputes as he held “cordial” talks with Chinese President Xi Jinping amid tensions in ties over a host of issues including the CPEC and India’s NSG bid.

The two leaders met in the Kazakh capital, Astana, on the sidelines of the Shanghai Cooperation Organisation (SCO) Summit. It is their first meeting after India boycotted the high-profile Belt and Road Forum held in Beijing last month in which 29 world leaders took part.

India abstained from the forum to highlight its concerns over the $50 billion China-Pakistan Economic Corridor which is part of the Belt and Road Initiative (BRI) and passes through Gilgit and Baltistan in Pakistan-occupied Kashmir.

During the meeting, Mr Modi said the two sides should tap their potential in cooperation, strengthen communication and coordination in international affairs, respect each others core concerns and appropriately handle their disputes.

The Indian side is grateful for China’s support for India’s accession to the SCO and will work closely with China in the organisation, Mr Modi said. Giving broad outcome of the meeting, foreign secretary S. Jaishankar said the broad thrust of it was that at the time of global uncertainty, India-China relations are a factor of stability and as the world becomes more multi-polar it was important for the two countries to work together more closely.

“There was an understanding that where we have differences, it is important that differences should not become disputes and in fact if they were handled well, could even be opportunities,” Mr Jaishankar told reporters, describing the meeting as “cordial” and “very positive”.

It is learnt that Mr Modi and Mr Xi discussed importance of connectivity including the Bangladesh, China, India Myanmar Corridor (BCIM) but there was no direct reference to OBOR.

Relations between India and China has witnessed a downturn owing to differences over a series of issues, incl-uding China blocking India’s move to get Jaish-e-Moh-ammed chief Masood Azhar banned by the UN, its opposition to India’s bid for NSG membership and China’s Belt and Road initiative.

Asked whether the NSG, OBOR and Azhar were rai-sed, Mr Jaishankar did not give a direct reply and said the meeting was for taking a broad assessment of the relationship.

“You should be rest assured that there was a sense that both sides would address each other’s concerns very seriously,” the foreign secretary said.

He said both the countries may have differences, but it is important to find “common grounds” and address each others concerns “with a degree of seriousness”.

“There was discussion on connectivity, how we could work together. In fact, to my recollection, the AIIB i.e. the Asian Infrastructure Invest-ment Bank and the BCIM Corridor came up for discussion,” he said when asked if China raised the issue of India’s boycott of the OBOR.

Asked about the Chinese stand on Mansarovar Yatra, he said the broad signal from the Chinese side was that “they accord us facilities which are very appreciated by the public in India and they understand that and they would continue to facilitate and expand its possibility.”

When asked whether the recent airspace violation by China was raised by the Indian side, he evaded a reply, saying “you people must see this summit level meeting for what it is.”

In Beijing, Chinese foreign ministry spokesperson Hua Chunying told a media briefing that both the countries “should also address sensitive and major issues” as she highlighted the issues figured in the meeting.

“India should focus more on cooperation and work alongside to provide assistance to each others developmental goals,” Ms Hua said.

“The two sides should strengthen the complementarities of the development strategies and press ahead with the major cooperation projects such as energy and railways,” Ms Hua said.

She also said the two sides should press ahead in a major way on Bangladesh, China, India, Myanmar Corridor (BCIM) besides tourism, culture and other fields. BCIM is part of the Chinas multi-billion dollar Belt and Road initiative (BRI).