The bus carrying more than 100 people was going from Kohat to Raiwind when the accident took place in Kallar Kahar town last night. 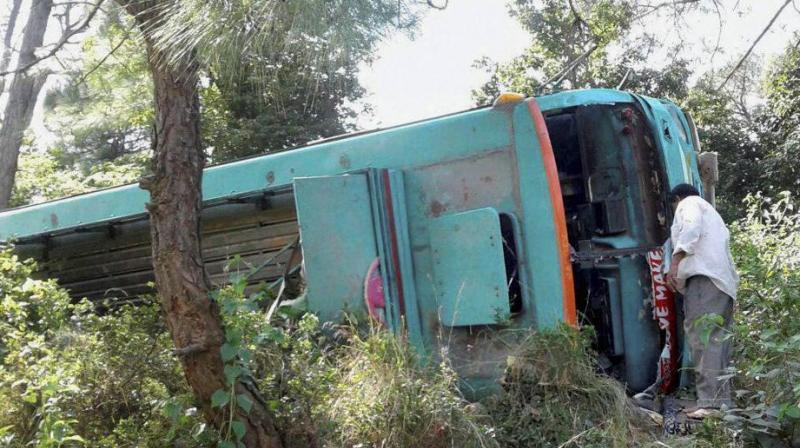 A bus fell into a ravine while it was passing through a slope in Punjab province in Pakistan on Wednesday night. (Representational Image | PTI)

Lahore: At least 27 people were killed and 69 others injured after a speeding passenger bus fell into a ravine in Pakistan’s Punjab province, officials said on Thursday.

The bus carrying more than 100 people was going from Kohat to Raiwind when the accident took place in Kallar Kahar town Wednesday night.

“The passengers were going to Raiwind to attend an annual religious congregation,” Muhammad Afzal, the Station House Officer of Saddar Police Station.

Thirteen of the injured were rushed to Rawalpindi because of their serious condition whereas many injured were shifted to nearby hospitals, the Dawn News reported.

The bus originally was to go to Raiwind via Islamabad- Lahore Motorway but it opted for another route. “The motorway is closed after 10 pm due to smog and overloaded buses are fined on the motorway because of which the driver opted to go through Grand Trunk Road,” Afzal said.

“The driver was unfamiliar with this area and he was driving the bus at high speed. The bus fell into the ravine while it was passing through a slope,” he said.

Punjab chief minister Shehbaz Sharif expressed grief over the loss of lives and sought a report of the accident.

He also ordered the authorities concerned to provide immediate medical treatment and relief to all those injured in the accident, the report said.

Road accidents are common in Pakistan. Most of them are caused by careless driving, bad roads and faulty vehicles.