Jaishankar is currently in Singapore on a three-day visit. 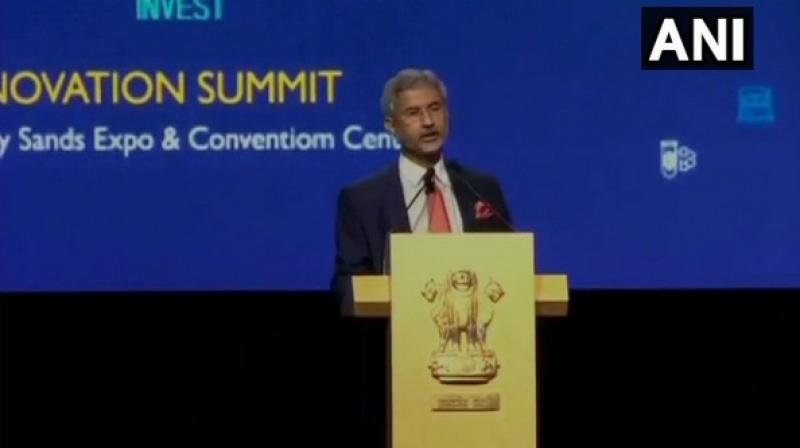 During the Plenary session, the minister recalled that India and Singapore came together in a very contemporary phase, at a time when the world was changing, including India. (Photo: ANI)

Addressing the inaugural session of 'Start-Up and Innovation Exhibition' here, Jaishankar said, "In political, strategic as well as economic and commercial areas, Singapore has become a fulcrum for India's policies. Today, what started as a bilateral relationship is something that has grown very much bigger. On rule-based issues, we think similarly."

During the Plenary session, the minister recalled that India and Singapore came together in a very contemporary phase, at a time when the world was changing, including India. "The two changes (India and Singapore) had something to do with each other," he said.

India, at that time, had a severe balance of payments crisis and was embarking on radical economic reform. "In that situation, India turned to Singapore and Singapore responded. We had the Look East Policy.  Singapore then became a key partner in India's growth and development," Jaishankar added.

In 1992, India launched the India-Asian partnership and by 2005 "we" were members of the East Asia Summit, the minister said.

During this period Singapore was a direct source of investments into India. Its financial market was a major source of capital.

It became a favoured and comfortable destination for Indian companies going abroad.

Around 20 per cent of India's investments came from Singapore and more than 9000 Indian companies were registered here, he noted.

Recollecting his service as a High Commissioner of India then, Jaishankar further added that Singapore was the first country with whom India had signed the comprehensive economic partnership agreement and said, "It was my privilege to serve here as these engagements took off."

"We have a very robust defence relationship. We have just completed 25 years of uninterrupted Naval exercises, which I think is the longest that India has with any country in the world," Jaishankar said on the occasion.

Speaking in terms of geopolitics, it's not only the rise of China and the sharper competition between the United States and China but the simultaneous rise of several countries.

"There is no hegemonic power to underwrite an international order but nor is there a global compact among nations. The international situation today is under stress, a very different one from 1992," the minister stressed.

During an interactive session following his address, Jaishankar also said that the "big concerns of India include its relationship with China because we run an enormous trade deficit with China which we believe is a result of unfairly restricted market access."

Prior to the event, Jaishankar and his Singapore counterpart Vivian Balakrishnan also attended 'InSpreneur3.0 - A Start-Up and Innovation Exhibition' in which around 60 startups from India had taken part in the exhibition.

Jaishankar is currently in Singapore on a three-day visit.