It was the strongest of some 355 aftershocks that have rattled the island since Sunday, the national disaster agency said. 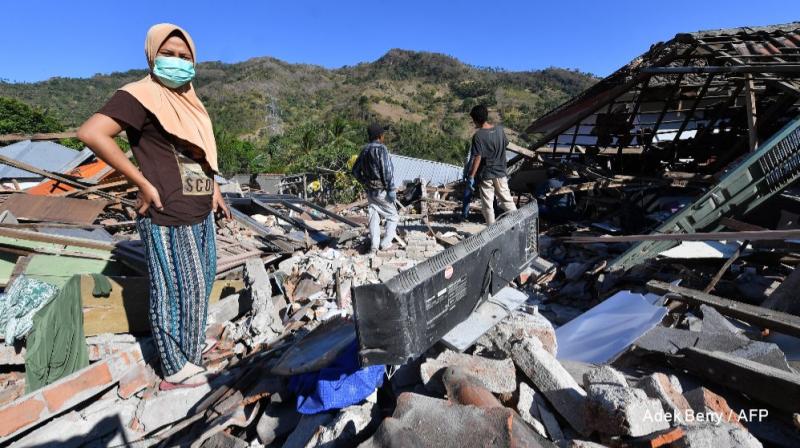 Motorcycles parked on the street toppled over and the walls of some nearby buildings collapsed in the aftershock. (Photo: Twitter/@AFP)

The 5.9-magnitude quake struck at a shallow depth in the northwest of the island, the US Geological Survey said, even as relief agencies raced to find survivors among the wreckage from Sunday's quake.

It was the strongest of some 355 aftershocks that have rattled the island since Sunday, national disaster agency spokesman Sutopo Purwo Nugroho said.

Evacuees at a shelter in northern Lombok's Tanjung district ran out onto the road crying and screaming, an AFP reporter at the scene said.

Motorcycles parked on the street toppled over and the walls of some nearby buildings collapsed.

A woman wearing a motorbike helmet was seen crying with her two daughters in her arms.

"We were stuck in the traffic while delivering aid, suddenly it felt like our car was hit from behind, it was so strong," witness Sri Laksmi told AFP.

"People in the street began to panic and got out of their cars, they ran in different directions in the middle of the traffic."

The aftershock comes just four days after a devastating 6.9-magnitude earthquake struck Lombok, which relief agencies said had wiped out entire villages in the worst-hit regions in the north and west.

A total of 164 people were now confirmed dead in the quake, Nugroho told AFP, with a further 1,400 seriously injured and more than 150,000 displaced.

State-run news agency Antara reported overnight 347 had been killed by the quake, but Nugroho said the tally was incomplete and unverified.

However, he said Thursday the "death toll has jumped significantly", without providing further details.

Aid begun trickling into some of the most isolated regions, officials said midday Thursday, but many people displaced by the quake still lack basic supplies.

In some parts of northern Lombok, survivors can be seen standing on the road with cardboard boxes asking for donations and food.

"I visited villages yesterday that were completely collapsed."

There are fears that two collapsed mosques in north Lombok had been filled with worshippers.

Rescuers have found three bodies and also managed to pull one man alive from the twisted wreckage of one mosque in Lading Lading village, while at least one body has been spotted under the rubble in Pemenang.

Authorities are gathering information from family members with missing relatives to determine how many more people may have been in the buildings when they collapsed, national search and rescue agency spokesman Yusuf Latif told AFP.

Across much of the island, a popular tourist destination, once-bustling villages have been turned into virtual ghost towns.

Many frightened villagers are staying under tents or tarpaulins dotted along roads or in parched rice fields, and makeshift medical facilities have been set up to treat the injured.

Evacuees in some encampments say they are running out of food, while others are suffering psychological trauma after the powerful quake, which struck just one week after another tremor surged through the island and killed 17.

There is a dire need for medical staff and "long-term aid", especially food and medicine in the worst-hit areas, government officials said.

Some evacuees have complained of being ignored or experiencing long delays for supplies to arrive at shelters.

"There has been no help at all here," said 36-year-old Multazam, staying with hundreds of others under tarpaulins on a dry paddy field outside West Pemenang village.

"We have no clean water, so if we want to go to the toilet we use a small river nearby," he said, adding they needed food, bedding and medicine.

The Indonesian Red Cross said it had set up 10 mobile clinics in the north of the island.

A field hospital has also been established near an evacuation centre catering to more than 500 people in the village of Tanjung.

Kurniawan Eko Wibowo, a doctor at the field hospital, said most patients had broken bones and head injuries.

"We lack the infrastructure to perform operations because (they) need to be performed in a sterile place," Wibowo told AFP.

Aid groups say children are particularly vulnerable, with many sleeping in open fields and suffering illnesses from lack of warm clothing and blankets.