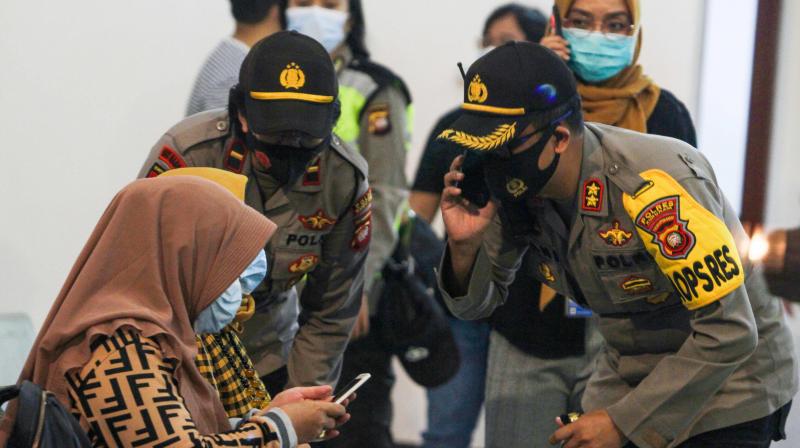 Relatives of passengers on board missing Sriwijaya Air flight SJY182 wait for news at the Supadio airport in Pontianak on January 9, 2021, after contact with the aircraft was lost shortly after take-off from Jakarta. - An Indonesian budget airline with 62 people on board is suspected to have crashed into the sea shortly after the Boeing 737 took off from Jakarta airport on January 9, authorities said. (AFP)

JAKARTA: An Indonesian budget airline plane with 62 people on board is suspected to have crashed into the sea shortly after the Boeing 737 took off from Jakarta airport on Saturday, authorities said. 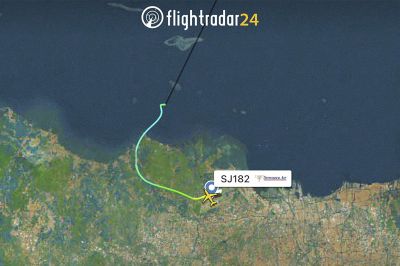 This radar image shows the flight path of Indonesian Sriwijaya Air Flight 182 before it dropped off radar, Saturday, Jan. 9, 2021. (AP)

Sixty-two passengers and crew were on board, including 10 children, the nation's transport minister, Budi Karya Sumadi, told reporters.

The suspected crash site is near tourist islands just off the coast of Indonesia's sprawling capital.

The plane took off on Saturday afternoon and a search and rescue operation began with no official results available on Saturday night.

"We deployed our team, boats and sea riders to the location suspected to be where it went down after losing contact," Bambang Suryo Aji, a senior official at the agency, told reporters after nightfall.

Sriwijaya Air flight SJ182 was bound for Pontianak on Indonesia's section of Borneo island, about 90 minutes flying time over the Java Sea.

"I have four family members on the flight -- my wife and my three children," Yaman Zai said as he sobbed at Pontianak airport.

"They haven't arrived. They're not here," he was heard saying as he spoke on his mobile phone.

Data from FlightRadar24 said the plane reached an altitude of nearly 11,000 feet (3,350 metres) before dropping suddenly to 250 feet. It then lost contact with air traffic control.

"Sriwijaya Air flight #SJ182 lost more than 10,000 feet of altitude in less than one minute, about 4 minutes after departure from Jakarta," the tracking agency said on its official Twitter account.

Broadcaster Kompas TV quoted local fishermen as saying they had found debris near islands just off the coast of the capital Jakarta, but it could not be immediately confirmed as having belonged to the missing jet.

Authorities and the airline gave no immediate indication as to why the plane suddenly went down.

The budget airline, which has about 19 Boeing jets that fly to destinations in Indonesia and Southeast Asia, said only that it was investigating the loss of contact.

In October 2018, 189 people were killed when a Lion Air Boeing 737 MAX jet slammed into the Java Sea about 12 minutes after take-off from Jakarta on a routine one-hour flight.

That crash -- and a subsequent fatal flight in Ethiopia -- saw Boeing hit with $2.5 billion in fines over claims it defrauded regulators overseeing the 737 MAX model, which was grounded worldwide following the two deadly crashes.

Indonesia's aviation sector has long suffered from a reputation for poor safety, and its airlines were once banned from entering US and European airspace.

Domestic investigators' final report on the AirAsia crash showed a chronically faulty component in a rudder control system, poor maintenance and the pilots' inadequate response were major factors in what was supposed to be a routine flight from the Indonesian city of Surabaya to Singapore.