Female politicians are still a relative rarity in the South, accounting for only 17 per cent of parliamentary representatives. 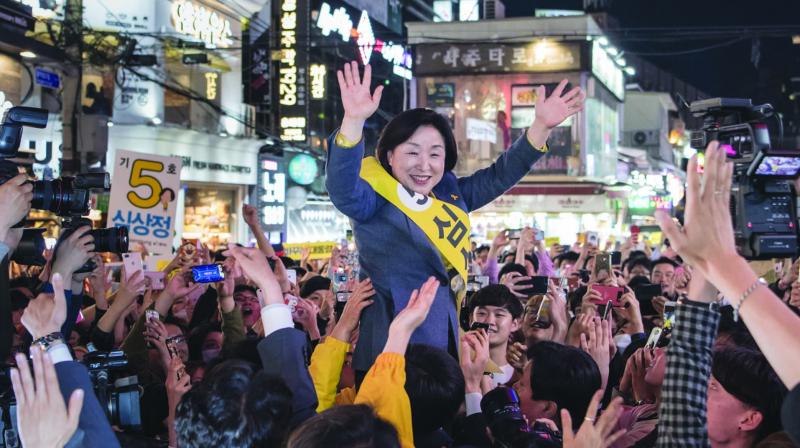 A file picture shows South Korean presidential hopeful Sim Sang-Jeung attending a rally in Seoul. Only one of the 13 aspirants for the post is a woman. (Photo: AP)

Seoul: When Park Geun-Hye was elected South Korea’s first female President five years ago she secured the largest-ever vote share of the country’s democratic era. But after her term ended in impeachment and disgrace only one of the 13 candidates to succeed her is a woman.

The only exception is Sim Sang-Jeung, a former labour activist who is the leftwing Justice Party’s candidate.

Ms Park — the daughter of the late dictator Park Chung-Hee — was ousted from power in March over a massive corruption and influence-peddling scandal centred on a secret female confidante that prompted millions to take to the streets calling for her ouster.

She is now detained and awaiting trial for charges including abuse of power and bribery, and the public outrage unleashed a storm of sexist remarks online such as — “Don’t even dream about having a female President for the next 100 years.”

Ms Sim condemns what she calls a sexual double standard, saying no one took issue with the gender of two previous Presidents — both men — who were imprisoned in the 1990s for their part in crushing the Gwangju Uprising against the military-backed dictatorship.

“We had two other ex-Presidents jailed for slaughtering countless citizens who were protesting against Army rule. But not a single person said, ‘No more male Presidents’,” she said in a campaign speech.

Ms Park is a conservative who did little for women’s rights, and female politicians struggling with the glass ceiling say her humiliating downfall has done nothing to help.

“I’ve seen recently many male voters, or even male politicians, saying, ‘This is why women should never be in politics’,” said Han Jeoung-Ae, a two-term lawmaker with the centre-left Democratic Party.

“We have no shortage of male politicians brought down by corruption and other crimes, but no one ever frames it as the failure of entire male politicians like they do over women,” she said.

Female politicians are still a relative rarity in the South, accounting for only 17 per cent of parliamentary representatives, ranking it 30th among the 35 nations of the OECD.

That is an advance on the six per cent of 2000, but it is still “extremely hard” for female politicians to secure electoral nominations, said Nam In-Soon, a Democratic lawmaker, who is pushing for parties to be legally obliged to select women as at least 30 per cent of their candidates.