Says attack was retaliation for firing by Afghan forces at border villages in Balochistan on Friday. 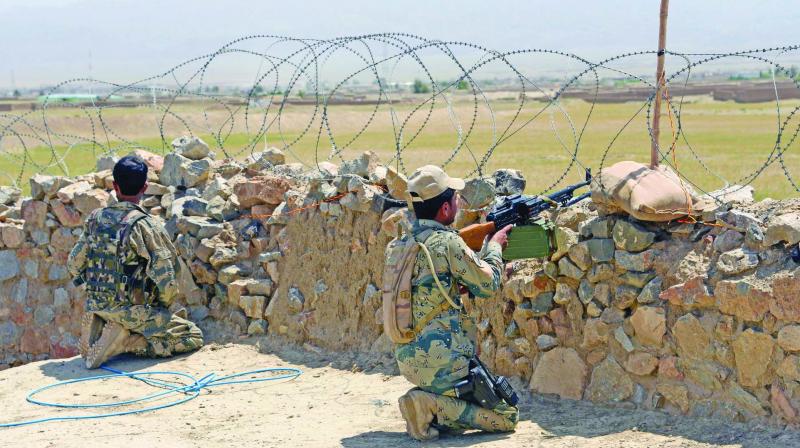 Afghan border police personnel keep watch during a battle between Pakistani and Afghan border forces near the Durand Line, at Spin Boldak, in Kandahar. (Photo: AFP)

Islamabad: The Pakistani Army on Sunday said it killed over 50 Afghan soldiers near the border between the two countries, as tensions between the two forces escalated after clashes earlier this week killed 10 Pakistani civilians.

Major General Nadeem Ahmed said more than 100 Afghan soldiers were also injured in the retaliatory attack by the Army to the firing by Afghan forces on Friday in the Balochistan province.

Mr Ahmed, however, told reporters he was “not happy” about the incident as “Afghans are Muslims, our brothers”.

Afghan and Pakistani security forces have been fighting since Friday when 10 Pakistani civilians were killed and more than 40 people, including women and children, were injured in firing by Afghan forces on Pakistani census workers and the troops escorting them at border villages in Balochistan.

The incident marked the latest round of escalation of border tensions between the two countries, which often accuse each other of sheltering terrorists who launch deadly cross-border attacks on each other’s soils. Both the countries deny the accusations.

“Anyone who tries to make Pakistan’s territory disputed will face similar consequences,” General Riaz said during a visit to Chaman, where the Friday clashes took place.

To a question on the closure of the border crossing point Bab-e-Dosti, General Riaz said it would remain shut unless the situation improves in the area. “The border will remain closed until Afghanistan changes its behaviour,” he said.

Pakistan’s defence minister Khawaja Asif said his country would respond instantly and effectively to cross-border attacks by Afghan forces on the census team.

Major General Ahmed said on Sunday that Pakistan had informed the Afghan side about the census team in border villages.