World   Asia  07 Dec 2019  'The rapist is you!' Global anthem against sexual violence is making its way to India
World, Asia

'The rapist is you!' Global anthem against sexual violence is making its way to India

The Indian chapter of it — 'A Rapist in Your Way Intervention India Chapter In Solidarity', — is scheduled to take place on December 7. 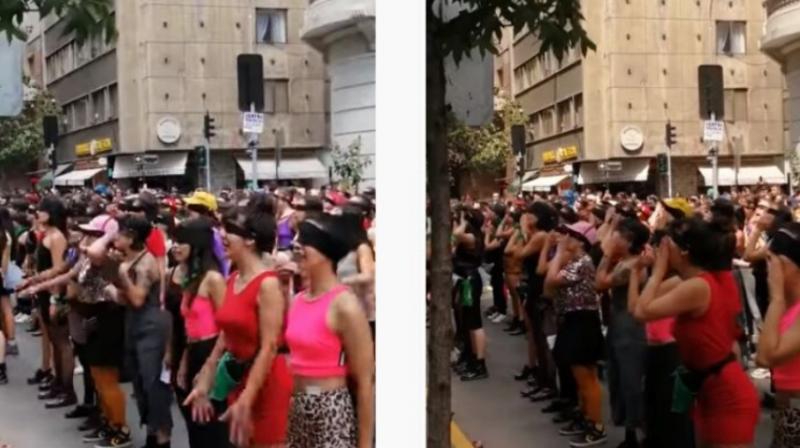 From quiet beginnings just a few weeks ago, The Rapist is You! - the creation of four performance artists from a Chilean feminist group - has turned into a mighty global roar against sexual violence. (Photo: Youtube/ screengrab)

From quiet beginnings just a few weeks ago, The Rapist is You! - the creation of four performance artists from a Chilean feminist group - has turned into a mighty global roar against sexual violence.

The women from the group called LasTesis said they never imagined their protest anthem, and its powerful message against macho violence, would be so quickly and energetically echoed around the world.

First performed in the port city of Valparaiso on Nov 20, in the space of a few weeks, it has been replicated hundreds of times around the world, and videos of flash mob performances have gone viral.

With its far reaching global impact, it wouldn't be wrong to wander that India should soon reverberate the same. And that's happening.

The Indian chapter of it — 'A Rapist in Your Way Intervention India Chapter In Solidarity', — is scheduled to take place on December 7, which calls for women to join the flash mob that'll add onto the global movement, reported News18.

Around 10,000 women of all ages from around Santiago, dressed in black and wearing red scarves and blindfolds, converged on the city's national stadium on Wednesday evening (Dec 4) for the biggest such performance yet after a call-out on social media.

"The fault is not with me, nor where I was, nor how I was dressed... The rapist is you!" the women sang, stomping their feet and waving their arms in a choreographed routine being rapidly adopted around the world.

"Patriarchy is a judge who punishes us for being born and our punishment is violence that you don't see," went the rhythmic chant.

Similar performances have been staged by women as far away as Paris, Barcelona and Mexico City.

Initially planned as a small part of a bigger artistic event about rape, LasTesis said they decided to release the performance early after complaints of police abuse of women emerged during a crackdown on recent social protests in Chile.

"The song came out of a call from various artists in Valparaiso to generate protests in the streets," the group said in an op-ed in Chilean weekly magazine The Clinic.

"It seems that worldwide, we perceive the same feelings about our bodies and our life experiences, and this has transformed into a great song," said the group, composed of actresses Sibila Sotomayor and Dafne Valdes, designer Paula Cometa and wardrobe artist Read Caceres, all aged 31.

The four women make up what they define as "an interdisciplinary collective of women who, through performance, address gender issues from a feminist perspective".

One of their first works was based on the work of American feminist author Silvia Federici and they also plan on adapting the work of Argentine writer Rita Segato and other Latin American artists.

On Wednesday, as the women went through their pulsating routine outside the national stadium - a secret detention centre during Augusto Pinochet's military dictatorship - many felt moved to blurt out their own stories of abuse.

"You could hear shouts in the middle, outside of the performance itself, of women alluding to their own experience, and that was very powerful," Jacqueline Saintard, a 66-year-old economist in the crowd, told AFP.

"This is a truth that is repressed all over the world," said Carmen, a 60-year-old biologist who took part, who did not want to give her full name.

"Women are mistreated everywhere, and there is a law of silence among the majority of men in the world."

For LasTesis, the performances have become a lightning rod for women's anger over sexual violence.

"It's devastating that the issues addressed in this song are still transversal on the social level, here and a little everywhere," the group said.