The motion would then require the approval of the Constitutional Court, whose deliberations could take up to six months. 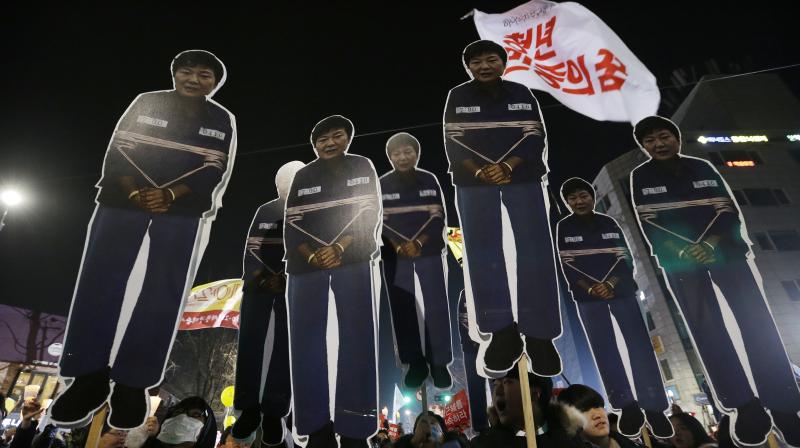 Protesters hold cutouts of South Korean President Park Geun-hye as they march toward the presidential house during a rally calling for Park to step down in Seoul, South Korea. (Photo: AP)

Seoul: South Korea’s scandal-hit President Park Geun-Hye said on Tuesday that she would accept the result of a looming and possibly lengthy impeachment process, but defied pressure to resign immediately.

An opposition-sponsored impeachment motion is almost certain to be adopted by the national assembly on Friday, with some 30 rebel MPs from Ms Park’s Saenuri party saying they will vote in favour.

The motion would then require the approval of the Constitutional Court, whose deliberations could take up to six months.

“Even if the impeachment bill is passed, I am resolved to continue calmly for the country and the people, while watching the Constitutional Court procedures,” Ms Park was quoted by Saenuri parliamentary floor leader Chung Jin-Suk.

During a meeting with the President, Mr Chung said he had told her that public sentiment had forced the Saenuri party to withdraw an earlier proposal for Ms Park to step down voluntarily in April. “She nodded and said she accepted my stance,” Mr Chung said.

During the latest rally against the South Korean President on Saturday, there was anger directed against the Saenuri’s resignation proposal, with protesters saying it was aimed at buying Ms Park time and avoiding impeachment.

As a result the party withdrew its whip aimed at defeating Friday’s motion and said its MPs would be allowed to vote freely.

Hwang Young-Cheul, one member of an anti-Park faction within the party, said the idea that the President could step down in April had “already been rejected by the people”. “All preparations have been made that are necessary to ensure the impeachment motion be passed,” he said.