Police said they arrested 298 people, mainly for illegal gatherings, in a notice on their Facebook page 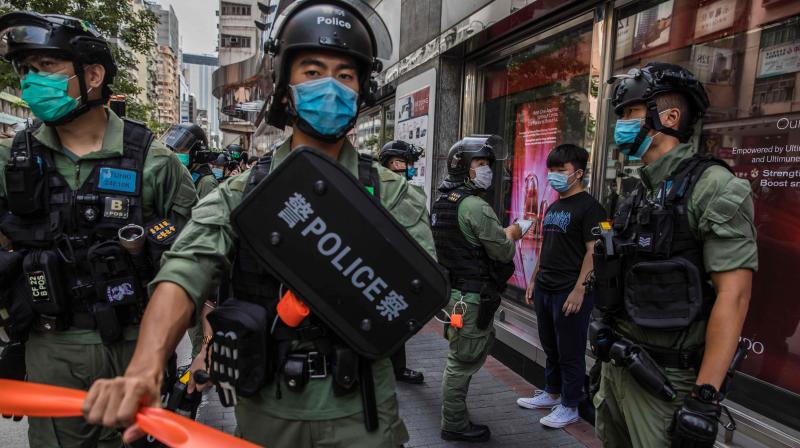 Police question a man as they patrol the area after protesters called for a rally in Hong Kong on September 6, 2020 to protest against the government's decision to postpone the legislative council election due to the COVID-19 coronavirus, and the national security law. (AFP)

Hong Kong: Police fired rounds of pepper balls at protesters in Hong Kong on Sunday and arrested almost 300 after demonstrators took to the streets to oppose the postponement of legislative elections and a new national security law imposed by China. Hong Kong leader Carrie Lam postponed the Sept. 6 election for seats in the Asian financial hub’s Legislative Council for a year in July because of a spike in coronavirus cases.

The move dealt a blow to the pro-democracy opposition which hoped to win a historic majority in the Council, where only half the seats are directly elected and the other half are appointed members who mostly support Beijing.

“Today is supposedly our voting day, we need to resist to fight back for our vote,” said a 70-year old woman surnamed Wong as she marched with other demonstrators.

The poll would have been the former British colony’s first official vote since Beijing imposed new security legislation in late June. The government insists there was no political motive behind the delay.

Thousands of police were stationed around the bustling Kowloon peninsula as hundreds of marchers waved placards and chanted popular anti-government slogans such as “liberate Hong Kong”. These slogans are now banned under the new security law. Police said they arrested 298 people, mainly for illegal gatherings, in a notice on their Facebook page.

Several well-known activists were arrested during the demonstration including Figo Chan, the vice-convenor of the Civil Human Rights Front and former legislator Leung Kwok-hung, also known as “Long Hair”, according to a post on Chan’s Facebook page.

Anti-government demonstrations have declined this year mainly because of limits on group gatherings, imposed to counter the spread of coronavirus, and the security law, which punishes actions China sees as subversive, secessionist, terrorist or colluding with foreign forces.

Critics say the law aims to quash dissent in the city, while supporters say it will bring more stability after a year of often-violent anti-government and anti-China unrest.

Hong Kong returned to Chinese rule in 1997 under a guarantee of autonomy but critics say the new law undermines that promise and puts the territory on a more authoritarian path.

Advocates of the law say it plugs loopholes in national security left by the city’s inability to fulfil a constitutional requirement to pass such laws on its own.