Doctors maintain South Korea already has enough medical professionals, but they should be better paid to encourage working in rural areas 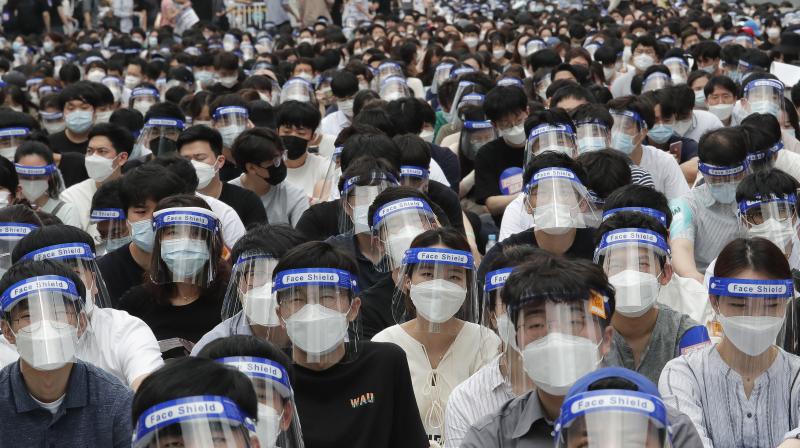 Seoul: Thousands of South Korean trainee doctors went on strike on Friday, protesting outside parliament against a government plan to boost the number of medical students in the country, arguing it would be a poor use of additional funding for the sector. The government said its goal to increase the number of medical students by 4,000 over the next 10 years was necessary to better prepare for public health crises like the coronavirus pandemic.

The student doctors, however, said extra funding would be better spent improving the salaries of existing trainees, which would encourage them to move out of Seoul to rural areas where more professionals are needed.

Prime Minister Chung Sye-kyun had urged the intern and resident doctors to call off the 24-hour strike, which comes as South Korea battles smaller but persistent clusters of COVID-19 infections.

“It is very concerning that a medical gap will occur in ERs and ICUs that have direct links with the citizens’ lives”, Chung said in remarks posted online.

About 12,000 trainee doctors took part in a silent protest outside the parliament in Seoul, wearing face masks and shields, according to protest organiser, the Korean Intern Resident Association (KIRA).

KIRA had issued guidelines ahead of the gathering, barring any chanting or singing to avoid the spread of COVID-19.

Chung asked the striking doctors to instead talk with the government, although did not offer any concessions.

Severance Hospital, one of the big five hospitals in Seoul, told Reuters other doctors would fill the gap created by a majority of its 400-odd trainees taking part in the strike.

The government announced in July that it planned to boost the usual medical school quota of 3,058 admissions each year by around 400, or 13%, over the next decade. The quota had been fixed since 2006.

Incentives will be offered for students majoring in less lucrative specialities such as epidemiology and those who volunteer for public health work in rural areas.

The country has fewer than 300 infectious disease specialists, representing less than 1% of its 100,000 doctors. And while Seoul has three doctors for every 1,000 people on average, the ratio in remote North Gyeongsang province, for example, falls to 1.4, said Health Minister Park Neung-hoo.

“The main reason for promoting this policy is to secure doctors where they are needed,” Park said.

The government plans to send three-quarters of the additional trainees to rural provinces, in exchange for tuition waivers and scholarships. If a 10-year stint is not completed, their medical license will be revoked.

Doctors maintain South Korea already has enough medical professionals, and they should be better paid to encourage a wider geographical spread.

“We, young doctors, are paid at the minimum wage and work 80 hours a week, twice what the labour law stipulates,” KIRA, which has 16,000 members, said. “We have nothing to lose.”

The association estimated it costs up to 300 million won ($253,000) to train a doctor, meaning the government’s programme will cost more than 1 trillion won.

A petition with almost 20,000 signatures calls for funding to be diverted to financially strained rural hospitals so they can offer stronger job security to medical staff. It also urges the government to make use of the around 700 doctors who retire from university hospitals and private clinics each year.

But a recent opinion poll showed that 58% of the 500 surveyed supported the government plan to increase the number of doctors.

Professional doctors are planning a strike next weekend.