At least seven photojournalists were injured in attacks with sharp weapons, sticks and iron rods while covering the protests on Sunday. 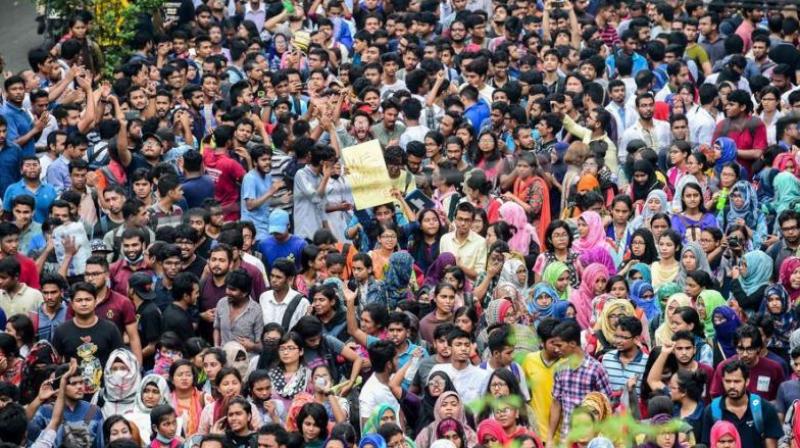 Bangladeshi students march along a street during a student protest in Dhaka on August 5.(Photo: AFP)

Dhaka: Journalists in Bangladesh on Tuesday gave a 72-hour ultimatum to the government to arrest those involved in attacks on some of their colleagues while covering the unprecedented protests by the students over road safety, according to media reports.

At least seven photojournalists, including an Associated Press (AP) photographer, were injured in attacks with sharp weapons, sticks and iron rods by youths wearing helmets at Dhanmondi, Jigatala and Science Laboratory areas on Sunday, while covering the protests.

Thousands of students brought parts of the Bangladesh capital to a standstill after two teenagers were killed by a speeding bus on July 29. A large number of journalists and photojournalists also gathered in front of the Jatiya Press Club here this morning and formed a human chain in protest against the attacks, the Daily Star reported.

"Journalists gave a 72-hour ultimatum to the government for arresting those who attacked some their colleagues during the ongoing student movement seeking safe roads. Otherwise, they will launch tougher programmes from August 11," President of Bangladesh Federal Union of Journalists (BFUJ) Molla Jalal was quoted as saying while addressing protesting scribes at the Jatiya Press Club.

They demanded the government to identify and arrest those involved in attacks on journalists after analysing the video footage.

"I am urging the information minister and home minister to sit with the journalists and try to identify those who played a role in the attacks and ensure they are punished," BFUJ general secretary Shaban Mahmud was quoted as saying in the Daily Star.

A number of journalists also formed a human chain at the SAARC Fountain in Karwan Bazar area. It is alleged that students associated with the Bangladesh Chhatra League (BCL) which is associated with the ruling Awami League and the Bangladesh Juba League (BJL) -- the ruling party's youth front, were involved in attacks on journalists, media reports said.

Meanwhile, Bangladesh Road Transport and Bridges Minister Obaidul Quader has asked journalists to come up with clear evidence that the BCL was involved in the attacks on their colleagues.

"Tell me specifically who from Chhatra League were involved? Please give me a list," he told reporters during a press conference at the party chief's office at Dhanmondi on Monday. He refuted allegations that members of the ruling party's student wing were involved in the attacks on the journalists in the Dhanmondi area on Sunday.

Meanwhile, the police have arrested 11 people for the violence during the unprecedented protests by the students over road safety.

"Police have registered 27 cases and the number of arrests and cases would rise," Md Muntasirul Islam, a deputy commissioner of Dhaka Metropolitan Police was quoted as saying by bdnews24.com.

Six people were detained over student-police clashes at Shahbagh on Monday.