A lawyer for Nissan former Chairman Carlos Ghosn, has outlined the conditions for his initial release on bail. 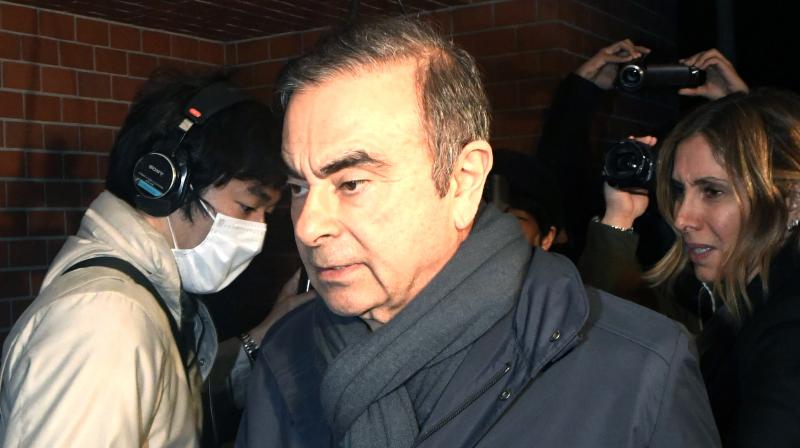 He was detained again on fresh allegations on Thursday. (Photo:AP)

Tokyo: A lawyer for Nissan former Chairman Carlos Ghosn, who was taken back into custody last week, has outlined the conditions for his initial release on bail in an effort to clarify what he called incorrect speculation in the Japanese media.

Ghosn, accused of financial misconduct, was arrested in November, but released in March. He was detained again on fresh allegations Thursday.

It is unusual in Japan for a suspect who cleared bail to be arrested again. Takashi Takano listed the conditions in a blog post late Saturday, which include restricting Ghosn to using only one computer, which is in his lawyer's office, and one cellphone. It's the first time such conditions, set by the Tokyo District Court, were disclosed in detail.

Ghosn, 65, who led Nissan for two decades, has said he is innocent. The conditions also said Ghosn must turn over his passport, have a camera monitoring his apartment doorway and keep a record of his phone calls and people he meets, besides his family and lawyers, Takano said.

Ghosn is forbidden from fleeing or tampering with evidence, and from meeting some people, including Greg Kelly, a Nissan Motor Co. board member suspected of collaborating with Ghosn, Nissan Chief Executive Hiroto Saikawa and others who may be witnesses in the case, he said.

The Tokyo District Court has approved his detention through April 14. His legal team is seeking to overturn that, arguing he already cleared the conditions for his release. The detention can be extended if the court approves the prosecutors' request. Prosecutors say the latest allegations are separate from the earlier charges, and Ghosn may tamper with evidence.

Ghosn's legal team argues that prosecutors have already raided Ghosn's homes and taken everything. While prosecutors can interrogate Ghosn daily at Tokyo Detention Center, Ghosn's time to work on his defense with his lawyers will become limited. Japan has been criticized for long detentions without convictions, dubbed "hostage justice." Critics say it tends to lead to false confessions.

Ghosn has been charged with falsifying securities documents and with having Nissan shoulder personal investment losses. The latest allegations center around Ghosn diverting a portion of money paid by a Nissan subsidiary to an Oman dealership business. Ghosn says the compensation, which was for his retirement, was never decided or paid, the investment losses were never suffered and the payments were for legitimate services.

The date for his trial has not been set and is likely to be months away. Nissan, allied with Renault SA of France, is holding a shareholders' meeting Monday to get approval to oust Ghosn from its board. Ghosn holds French, Brazilian and Lebanese citizenship.