Former Nissan chief Carlos Ghosn posted bail of 1 billion yen ($9 million) in cash, paving the way for his release from a Tokyo detention. 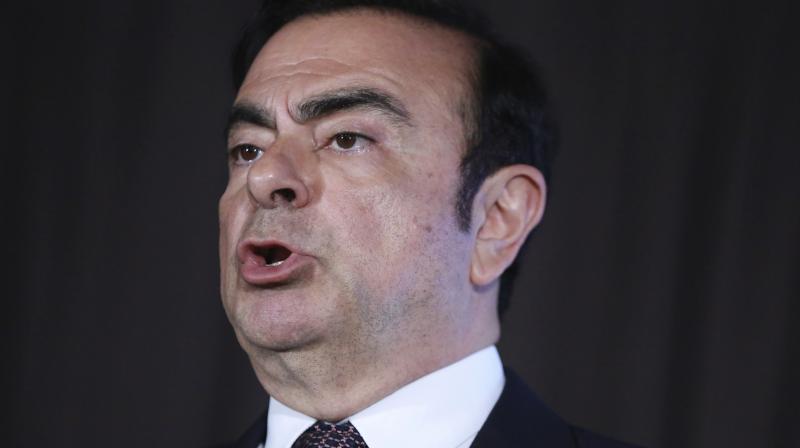 The auto tycoon is expected to walk out of the custody centre in northern Toyko. (Photo:AP)

Tokyo: Former Nissan chief Carlos Ghosn posted bail of 1 billion yen ($9 million) in cash Wednesday, paving the way for his release from a Tokyo detention centre after more than three months in custody.

The auto tycoon is expected to walk out of the custody centre in northern Toyko after the court rejected a last-ditch appeal from prosecutors to block his release. Dozens of journalists gathered outside the jail in northern Tokyo from dawn on Wednesday, but prosecutors could still prevent the release by filing new allegations against Ghosn, who already faces three charges of financial misconduct.

Overnight, he once again proclaimed his innocence of the charges, which include claims he under-reported his salary and sought to shift personal losses to Nissan's books.

"I am innocent and totally committed to vigorously defending myself in a fair trial against these meritless and unsubstantiated accusations," the 64-year-old said in a statement.

Members of Ghosn's family were also seen entering the building prior to an expected release. The surprise court ruling granting Ghosn bail came after two unsuccessful previous attempts to win release and was the latest twist in a case that has gripped Japan and the business world since the auto industry titan's November 19 arrest.

The bail terms prevent Ghosn from leaving Japan and include other measures restricting his communications. Kyodo news agency said the measures will restrict Ghosn's cell phone use and allow him to access a computer only in his lawyer's office during daytime hours on weekdays.

He will also be banned from contacting Nissan executives and other people with links to the allegations against him, the agency reported. But Kyodo said Ghosn could still attend board meetings at Nissan, where he remains a director, if the court gives approval.

His former right-hand man Greg Kelly, who was also detained November 19 on allegations he helped under-report the tycoon's compensation, was freed on bail of 70 million yen ($635,000) on Christmas Day.

Ghosn's prolonged stay behind bars has come under fire internationally and from rights groups. Speaking to AFP and the French daily Les Echos in January -- his only interview with foreign media so far -- Ghosn said his continued detention "would not be normal in any other democracy".

"Why am I being punished before being found guilty?" he asked. Under Japanese law, prosecutors can hold a suspect for up to 22 days while they investigate an allegation, and then can apply for repeated one-month stretches of pre-trial detention for each charge eventually levelled.

That means prosecutors could effectively prevent Ghosn from leaving detention despite Tuesday's bail decision if they level new allegations against him, restarting the 22-day detention clock.

In a shake-up of his legal team last month, Ghosn replaced a former prosecutor known as "The Breaker" with Hironaka, who has earned the nickname "The Acquitter" for his court record and "The Razor" for his mental sharpness. Speaking to reporters on Monday, Hironaka had vowed a "completely new legal strategy" to obtain his client's release, and experts said the change of tack appeared to be behind the surprise bail ruling.

"I think the content of the lawyer's application changed the situation," said Japanese lawyer Nobuo Gohara. Nissan declined to comment on the bail decision, saying it was a matter for courts and prosecutors.

However, it said that an internal probe had "uncovered substantial evidence of blatantly unethical conduct" and that "further discoveries related to Ghosn's misconduct continue to emerge".

"The company's focus is firmly on addressing weaknesses in governance that failed to prevent this misconduct," it added in a statement. A towering figure once revered in Japan for turning around Nissan's fortunes, Ghosn also forged a successful alliance between Nissan, Mitsubishi Motors and France's Renault.

But his attempts to deepen the alliance caused resentment in some quarters, and Ghosn has claimed the allegations against him are part of a "plot" by opponents of greater integration between the three firms. Given the number of people involved in the complex case and their wide geographical spread, Hironaka said the case would run over a "very long time span".

However, he said prosecutors had begun handing over some of their evidence prior to a potential trial.