Wednesday's test indicates that the country will press ahead with plans to build powerful, sophisticated missiles 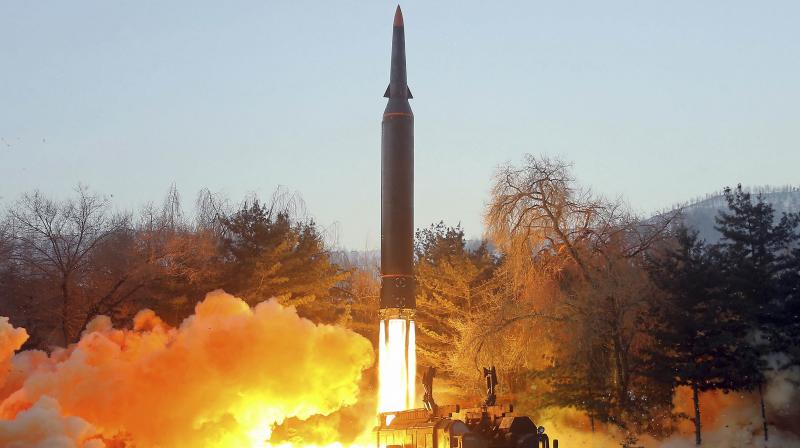 This photo provided by the North Korean government, shows what it says a test launch of a hypersonic missile in North Korea Wednesday, Jan. 5, 2022. (AP)

Wednesday's test, the North's first known weapons tests in about two months, indicates that the country will press ahead with plans to build powerful, sophisticated missiles rather than returning to disarmament talks anytime soon.

The official Korean Central News Agency said the Central Committee of the ruling Workers' Party expressed great satisfaction at the results of the missile test observed by leading weapons officials.

The successive successes in the test launches in the hypersonic missile sector have strategic significance in that they hasten a task for modernizing strategic armed force of the state, a KCNA dispatch said. The word strategic implies the missile is being developed to deliver nuclear weapons.

Hypersonic weapons, which fly at speeds in excess of Mach 5, or five times the speed of sound, could pose crucial challenges to missile defence systems because of their speed and maneuverability.

It's unclear whether and how soon North Korea could manufacture such a high-tech missile, but it was among a wish-list of sophisticated military assets that Kim disclosed early last year, along with a multi-warhead missile, spy satellites, solid-fuelled long-range missiles and underwater-launched nuclear missiles.

The North's latest launch was first detected by its neighbours.

The US military called it a ballistic missile launch that highlights the destabilising impact of (North Korea's) illicit weapons programme. South Korea and Japan expressed concerns or regrets over the launch. UN Secretary-General Antonio Guterres reiterated that North Korea should resume talks with other countries.

A US-led diplomacy on North Korea's nuclear programme remains stalled since 2019 due to disputes over international sanctions on the North. The Biden administration has repeatedly called for resuming the nuclear diplomacy anywhere and at any time without preconditions, but North Korea has argued the US must first withdraw its hostility against it before any talks can restart.

During last week's plenary meeting of the Central Committee of the ruling Workers' Party, Kim repeated his vow to expand his country's military capabilities without publicly presenting any new positions on Washington and Seoul.

The North's advancing nuclear arsenal is the core of Kim's rule, and he's called it a powerful treasured sword that thwarts potential US aggressions. During his 10-year rule, he's conducted an unusually large number of weapons tests to acquire an ability to launch nuclear strikes on the American mainland.

But his country's economy has been faltering severely in the past two years due to the COVID-19 pandemic, the sanctions and his government's own mismanagement.